If you take a recent piece in the St. Louis Post-Dispatch at face value, Tony LaRussa is looking at three candidates for closer in 2009.

Motte is a converted catcher, and Perez, like Motte, is probably too raw for LaRussa's taste. Both the kids throw some serious heat.

Carpenter is a possibility, according to LaRussa. Using the former Cy Young winner out of the bullpen isn't a new idea for St. Louis- but his one relief appearance in 2008 was his first since 2000. While LaRussa did hint at Carpenter getting some save opportunities, nothing ever materialized.

What LaRussa really wants is someone else to close - Brian Fuentes was the first target - and Carpenter to be in the rotation. Moving Carpenter would be a Kerry Wood-esque decision for the Cardinals, and a career change for the pitcher.

Here's what Tony says about going ahead with Motte and/or Perez.

"They're still a ways away from being a complete answer," La Russa said. "The way they can get there is to be put in a situation where they can learn, they can grow, without having the stress of it being all up to them to get that last out, and nothing to protect them. Our plan all winter was to try and beef it up to do something as we continue to develop these young guys. A guy like Fuentes was a real good fit for us, and we were all disappointed that it didn't work out. Now we go to Plan B. To me, you do what you have to do. If we get nobody, we'll push the kids some. But if you really want to get serious about getting the most out of them for their career, you want to protect those guys this year while they're learning their trade."

While LaRussa certainly looks at the kids and Carp as plans C, D and E, he may end up stuck with what he's got. There a few interesting names available, according to LaRussa.

La Russa also didn't entirely rule out signing a closer with health issues, such as Takashi Saito or Chad Cordero. The club's front office, however, has expressed significant reservations about signing any more players who are health risks.

Going with the conventional wisdom (as dangerous as that may be), the usual closer suspects are guys with two good pitches - fastball/change, fastball/slider etc. While you'll find firemen like Bobby Jenks, who have the full starter's repertoire, you'll find more Carlos Marmol* types. It's usually a hard thrower, but there are exceptions.

Having seen Motte, Perez and Carpenter pitch (thanks to MLB TV), I'm curious about the notion of the young ones not being ready yet, and the thought of switching Carpenter. Naturally, I'll employ PITCHf/x data and try to look at the conventional criteria, and see if Tony has "legitimate" concerns about Motte and Perez.

Here's what I'm looking for:

There isn't a lot of PITCHf/x data on any of these three pitchers. Perez (737) has the largest sample, Motte (171) the smallest, and Carpenter just a few dozen more. Still, it is enough to get a sense of these guys and get a peg on what folks may be talking about this Spring.

Motte has a ridiculous four-seamer, and I think he's tried out a two-seamer (once, maybe). He dropped a couple splitters in one game, but, otherwise, he's been working on a slider of some kind. It's different every day.

Carpenter has a curve (more of a 10-4) a slider/cutter and, based on what I can see, just a two-seam sinker now. I'm not 100% certain, and some thoughts on that from Cardinal/Blue Jay types would help out this naive Chicago Northsider. Carpenter also has a change that only is shown to, and kept away from, lefties.

Perez is a fastball/slider guy. May have, like Motte, dropped in a single two-seamer, but relies on the four-seam. Will mix in an overhand delivery for a curveball.

All of the data reviewed here is from the 2008 season.

Skip this if you are familiar with the data I've been presenting lately, nothing new here in the italics for you. For the rest of you.... some of this may be obvious, but mph is pitch speed at release (55 ft out) and may be faster than what you're used to on Gameday (50 ft) or radar guns (varies, may be about 40 ft). pfx numbers are movement caused by spin, measure in inches (catcher's perspective, negative is left/down). deg/rpm are the spin angle and spin speed. Swing is swing rate, whiff is whiffs/swings, B:CS ratio is what you think it is, ISZ is in strike zone (rulebook) rate, paint is the extra three or so inches everyone actually plays to, chase is swing rate out of the zone and watch is for takes in the zone. Still with me? FatIns are pitches that are over the middle or middle-in of the plate, 12 inches total width. FIISZ is the ratio of "fat" pitches to strikes. In Play, Home and Foul rates are just like whiff, based off of swings. nkSLG is total bases divided by balls in play + home runs, TBP is total bases per pitch.

Jason Motte throws a very straight fastball, that, in the limited time he's had, tends to catch a lot of the plate. Good news is, hitters don't seem to swing at it and, when they do, they don't do much with it. I guess that's what happens with a 97 mph fastball. 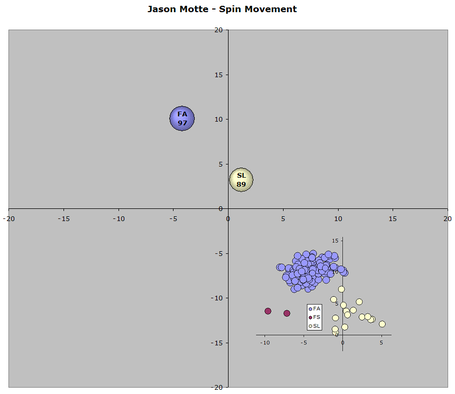 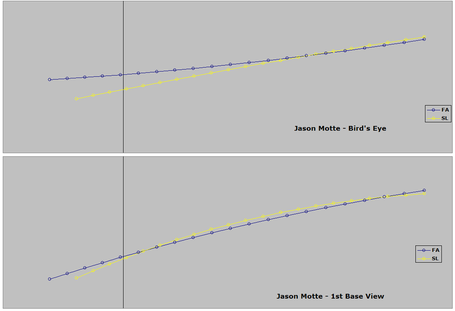 With only two in the sample, I didn't path the splitter.

The fastball is insanely filthy - he throws strikes, misses bats, and yields nothing. In his robust 11 innings in the majors, that is.

Just 153 pitches doesn't say too much, but a whiff rate like that on a fastball is unreal. That would be a good slider or change-up. You can also see how he pounds the zone (and/or wide zone with the paint added).

Here are his pitch locations against lefties: 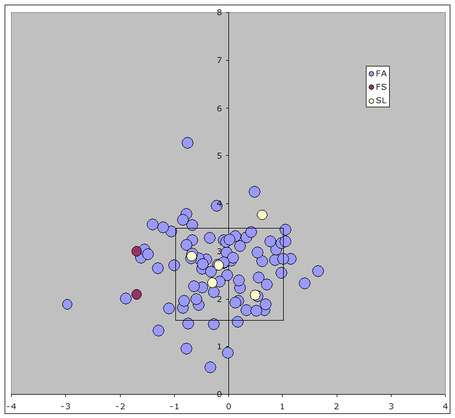 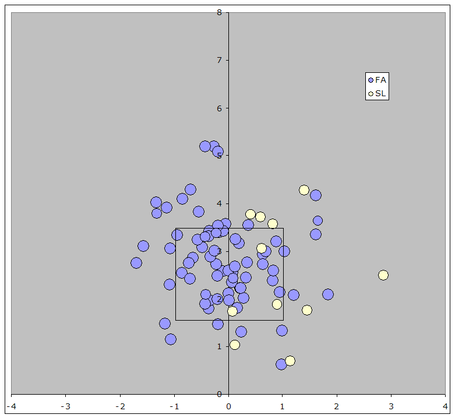 He does get a bit wild , but does a nice job of throwing the slider for strikes to LHH and keeping it away from RHH. We'll see if Motte develops that splitter as another option when the platoon effect is against him.

OK, fastball, fastball, fastball. Notice the ratio of pitches thrown ahead in the count compared to behind, Motte appears to either get in play or get ahead. Also, when he's ahead is about the only time he'll try a slider.

Motte does catch a lot of the plate a lot of the time. Still, all hitters can do with the fastball is whiff or foul it. And when it does goe in play, you're talking about base hits, not extra base hits. His TBP (total bases/pitches) less than .03 (.10 is average).

At the moment, the slider isn't much of a weapon for Mott. With his velocity, it may not take too much for him to develop it into a better pitch. What's odd about it now is the inconsistency of it.

Here are speed graphs, game by game, for Motte. The left pane is at or near release, the right side is at the front of home plate. Look at the variance in the slider - from game to game and from pitch-to-pitch. He's got at least two different speeds going on it.

Or, maybe there are three things going on? Here's a zoom of the PFX graph (spin movement, in inches, catcher's view). I've included the FA/FS for reference, but without MPH added to the bubble. I've also left off Cincy and Pittsburgh due to their alignment issues. 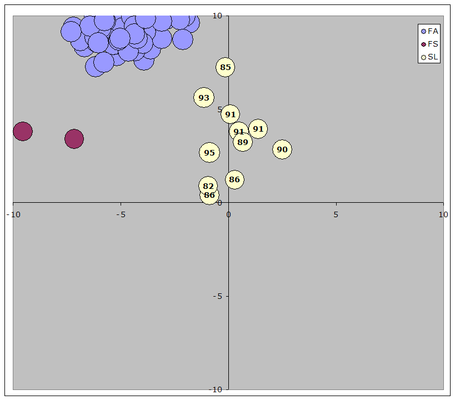 So, we'll see about this slider/slutter/cutter (or all of the above) this Spring. I'll grant LaRussa the benefit of the doubt on this one. Until he can prove to throw something other than a really hard, straight fastball - and reliably throw it - the risk level may be too high. He could be a valuable set-up man, and should probably go on the Marmol plan.

I've spent some extra time on Motte, so I'll shorten up a bit on the last two. I have to admit, Motte fascinates me.

Chris Perez got a good amount of work in 2008, with what I'd consider mixed results. While he struck-out more than one an inning, he also allowed more than one HR/9ip and a K:BB ratio below 2.0. Right there, he falls short. At least we have a larger sample.

Before jumping into spin movement, I want to point out the speed difference between the slider and, more so, the release point. 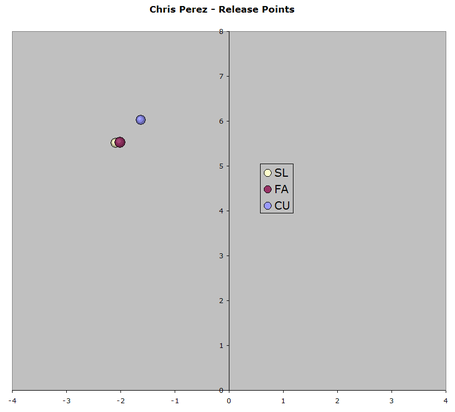 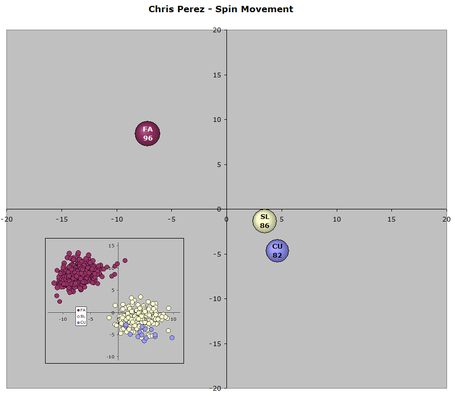 Now, you can see the curve's speed is slower, but the movement not a whole lot different from some of his sliders. But the release point comes back into play here in the flight paths: 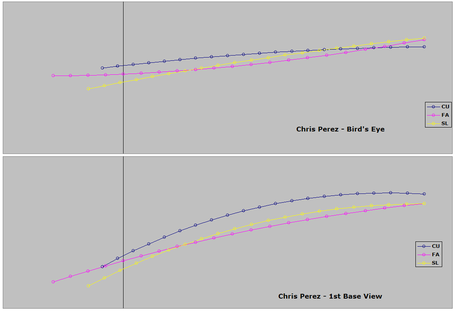 That is pretty clear now, isn't it?

Perez only throws that curve to lefties:

That's a very nice fastball, a pretty decent slider with a very high swing rate, but not such a hot whiff rate. The curveball may just be a show-me pitch.

Perez gives up a wee bit too much on the slider (it isn't a plus pitch). I am a little surprised at the walk rate, given the way he keeps the ball in the zone. He doesn't throw as many strikes as Motte, however.

So, Perez has the heat, but I wouldn't call him a strike thrower (yet) and his secondary stuff is far from nasty. His SLG rates on balls in play (and home runs) isn't awful, but below average. His TBP, however is slightly better than the league. Considering he's a reliever, and the "league" samples include starters, I don't find his numbers impressive enough to get the high leverage outs that LaRussa is looking to cover.

Update From erik's comment, the issue of pre/post call-up versions of the slider - and he's right, it was better:

So far, I have to agree with LaRussa. Neither pitcher screams dominating closer at the moment, and, given their youth, LaRussa may be wise to let them work in set-up roles and grow.

Chris Carpenter, on the other hand,would face an altogether different type of challenge. It is a long shot, but, just for the heck of it, does he have the mythical "closer's stuff"? Carpenter fits in with other solid sinker-ball pitchers, like Brandon Webb, Roy Halladay and Derek Lowe.

The fastball's velocity is above average and has a lot of movement, making it a very effective pitch. 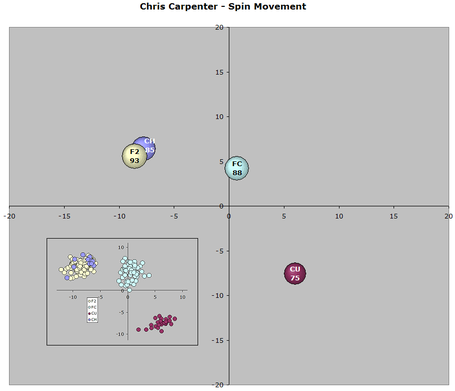 One of the reasons I feel like he's throwing very few, if any, four-seamers is the movement relative to the change-up. I'm guessing that's a four-seam grip moved into a circle-change. 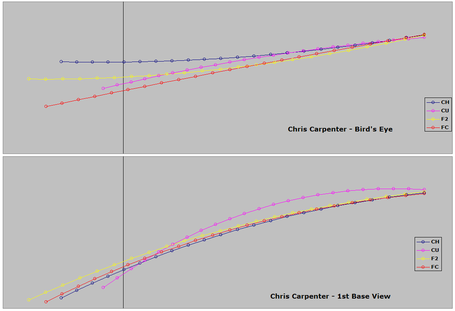 There's only 38 of them, but the change (CH) and curve (CU) don't find the zone often. Or a bat. Notice the ultra-low whiff on the fastball - another symptom of a two-seamer. He doesn't get guys to chase any of his four pitches out of the zone - none of them come with 5 or 6 percentage points of being average.

Again, not a great sample to work with, but Carpenter really pounds the zone with the sinker and the cutter. He'll give up his share of singles, so he'd be optimal coming in with the bases empty, but can go after a guys in the zone if he needs to. Despite being relatively fat, the sinker/cutter (especially the latter) don't get hit all that hard.

So, I'm more familiar with these three guys now, hopefully you are, too. But I agree with LaRussa, it is time to put these guys out of mind and go get someone on the free agent market. All three, IMO, could do the job, but I do see his point. If there's enough interest, I can run Juan Cruz and Brandon Lyons next.

Quite honestly, if I had to choose right now, I'd actually go with Motte. As a Cubs fan, I don't want to see the Chicagoans face him very often.