Share All sharing options for: What's the Fuss? #3 Tim Redding

Tim Redding is a free agent commodity.   Sort of.

The righty from Rochester became a free agent after the Nationals non-tendered him - making him their only arbitration eligible player to be shown the door.  According to mlb.com, Washington made the decision after being unable to move him to Colorado at Las Vegas meetings.

Redding made $1 million in 2008, and was due for a raise via arbitration.  Now that he's a free agent, he may not even get a guaranteed deal.  Eric Seidman pondered the Redding question a couple weeks ago, listing four suitors.  Even now, Jon Heyman has him as a top 20 free agent (of what's left), 8th amongst pitchers.

I don't exactly agree with these rankings - Jon Garland? Really?  But, there you have it.  Nonetheless, I think Redding may indeed be a nice bargain - if you set your expectations correctly.

With the Rockies apparently set with Jason Marquis, and Heyman not mentioning the Rangers (as Eric had), the Mets and Orioles remain.  With Mark Hendrickson gone to Balitmore, suddenly the fuss over Redding, and his job options, thin out.  Especially with the Mets still talking to Derek Lowe and Oliver Perez.

Redding had a decent year for Washington, setting career highs in starts, innings and strike-outs.  Ten wins was enough to both lead the club and match his career high.  Redding also gave up 11 more home runs than he ever had before.  Counting stats are a double-edged sword.

If someone does offer him a deal, here's what they'll be getting.  A 5'11" righty who throws the basic four pitches:

if you need definitions for any of the following, click the "pitchfx" tag at the end of the post 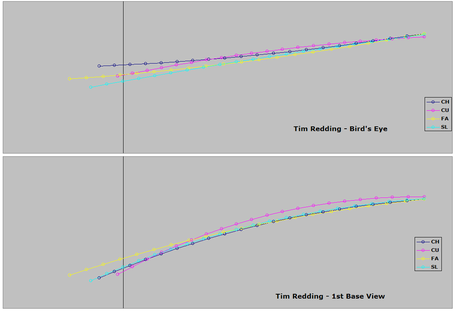 His stuff even looks slightly below average. 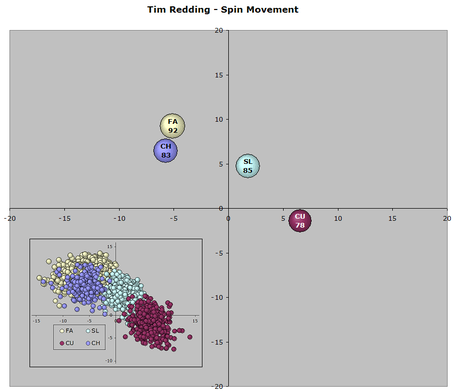 The inset looks like a big smear of pitches, but, park by park, game by game, they are fairly distinct.  Still, all pitches are on a continuum, we just try and give them discrete labels.

Let's go into the outcomes/effectiveness.

Notice the low whiff rates (fastball's not bad, though).  His stuff doesn't seem to fool anyone.

So, he seems to be a bit of nibbler - throws less fat pitches than average and his B:CS is on the higher side.  His stuff just isn't all that great, but he manages to avoid getitng hit all that hard.  If I had to pick an average looking big league pitcher, Redding would probably be on the short list.

Redding may be Mr. Average, but he may be a good bargain - he could end up being worth as much as $6.5 million but could end up getting just around $1 million, again.