Position Adjustments Across the Decades

Share All sharing options for: Position Adjustments Across the Decades

Sean Smith penned a neat article at Fangraphs yesterday, addressing the topic of historical defense-based positional adjustments.  He used TotalZone, his own fielding metric based on quasi-play-by-play data from Retrosheet, and compared how players fared at multiple positions within the same season.  Let's see the summary graph: 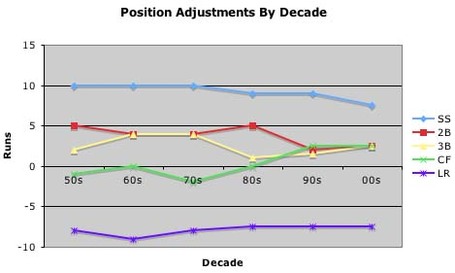 While a rolling average of year-by-year data would have been even better, there are some definite trends to pick out from the graph: