About Those Astro "Youngsters"

Share All sharing options for: About Those Astro "Youngsters"

The Astros may already have a rotation in mind - according to mlb.com, that would go

Still, as Alyson Footer reported, there is a chance for at least two other pitchers to break through.  Both Fernando Nieve and Felipe Paulino will be stretched out this Spring and given a shot.  They have somewhat similar backgrounds, but they're not in the same boat.

Nieve's future is fairly uncertain, and Paulino needs to prove he's healthy.  Since predicting the future is tricky, I'll dwell on the past via PITCHf/x.

Nieve, during May and September 2008, was mostly a fastball/slider guy.  In 194 pitches that are covered by his PITCHf/x data, there are just eight change-ups and two apparent curveballs.

Paulino, with data from September of 2007, mostly threw fastballs, like Paulino, but his slider was harder - I tag it as a cutter, but that is debatable. Paulino - or Paulino del Guidice - also threw a change and curve, but more often than Nieve did.

For whatever reason, Nieve didn't face many lefties.  While both pitchers have, excuse me, had good velocity over these samples, Nieve starting throwing more of his "sliders" harder than earlier in the season.  Either that, or Houston's PITCHf/x was adjusted.  I don't think that's the case, as Nieve's other pitches don't shift. 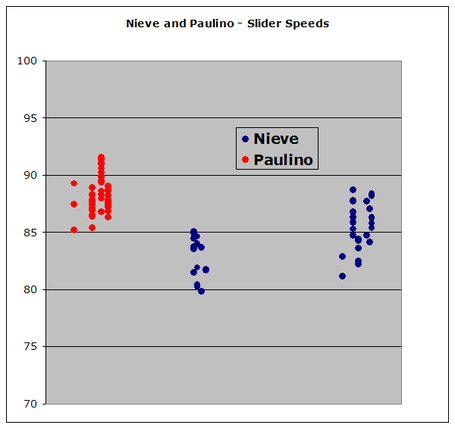 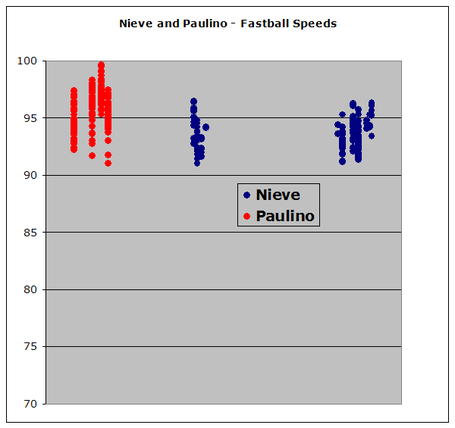 I suspect Paulino's #'s are a bit inflated by that one appearance that stands out - from Cincinnati.

Despite the limited samples, I figured it would be entertaining (to myself at least) to compare the two pitches, beyond the "Paulino throws harder".

Paulino threw more strikes in the rulebook zone and in the slightly wider as-actually-played zone.  This also includes more pitches in the fat and middle-in zone.  As you'd expect, this resulted in a better B:CS ratio for Paulino.

Nieve also got beat on swings out of the zone (Paulino gets more Chases) and he really looked bad on takes in the zone.

Given the unusually high swing rate in the zone (the inverse of "Watch" or takes in the zone), Nieve, with his lower quantity of strikes still managed to eek out a slightly higher overall swing rate.

Even without the benefit of a few extra hitters chasing pitches out of the zone, and without the extra hop on the fastball, Nieve has a noticeably higher whiff rate than Paulino.  On balls in play, though, Nieve got hit slightly harder, and the two pitchers both ended up with similar rates of total bases per pitch.

I'll call it a draw.  They sure get there different ways, though.

Now we get a match on pitch locations, at least by these rates.  I'm ignoring pitch height (for now).  Nieve checks in with, based on the Chase and Watch rates, somewhere around league average numbers (an approximation of deception, also).  Paulino, on the other hand, gets more swings in and out of the zone.  Nieve, again, wins on the whiff rate.

The big difference is in how hard they got hit - Paulino's hard slider got hit pretty hard, while Nieve had great success with his slower version.  Granted, Nieve dialed up the speed of that slider over the course of the Summer, or so it appears (see above).

What I'll show you below is how Paulino racked up his TB on the slider while Nieve didn't - while both only allowed two hits.

The small sample size doesn't quite render the numbers meaningless - they do reflect reality.  But they also, upon closer examination, show how "reality" isn't always reliable over time.

Back to the locations.  First are the sliders - Paulino's is labeled "FC" for cutter, but I don't buy that ID anymore.  I'll probably change that next time around. 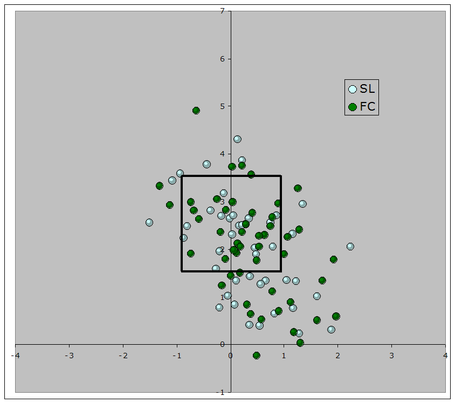 You can see that the rates shown above reflect a pair of very similar plate locations.  I also suspect we're looking at similar arm angles (Paulino is taller by three inches).

Here are the fastballs - Nieve in red, Paulino in blue. 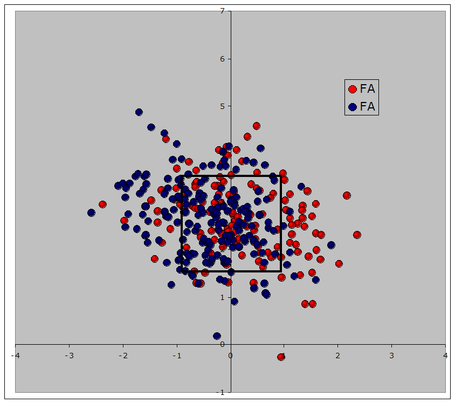 All the pitches on the left (catcher's view, BTW), or almost all, are to left-handed hitters.  Against righties the difference, which you can see above, is Nieve goes outside and off the plate quite a bit.

To wrap-up, two more pictures - plate locations of balls in play for the sliders, and then just the hits. 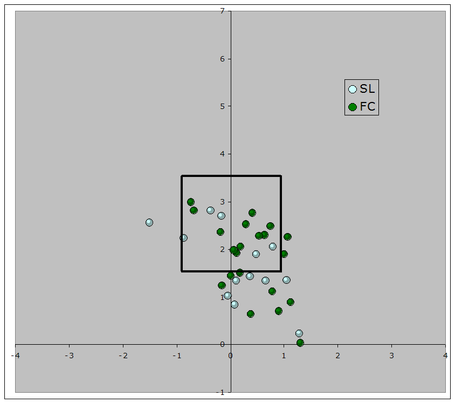 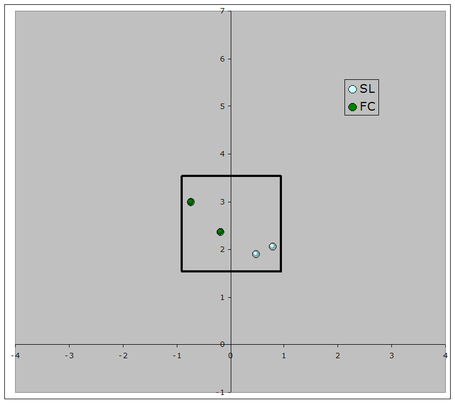 Those green dots are sliders (or cutters) from Paulino.  Both to left-handed hitters, both went for home runs.  Geoff Jenkins did it on a 1-2 pitch, and it's the higher of the two.  So much for Mr. Low Ball Hitter.  However, according to Hit Tracker, it went 380 feet and was "Just Enough / Lucky".  Johnny Estrada took the fatter of the two Paulino sliders out on a 2-2 count.  No data in Hit Tracker, unfortunately.

I'd say the difference, in these brief big league call-ups, between Nieve's and Paulino's sliders is Nieve managed to minimize, or avoid, mistakes.  Whether by luck or good pitching is unknown.  I will give Paulino a partial pass on the Jenkins home run.  "Lucky" as it was, that was not a good pitch, and a slider in the dirt would've done the trick.

I do like Paulino's aggresiveness with the fastball, and Nieve could throw more stirkes with his.  The sliders are both pretty good.  Again, Paulino's extra speed is attractive, but Nieve has shown his can be effective as well.