Brandon Lyon came up in a thread about the Cardinals and their closer situation/dilemna.  While Tony LaRussa liked Lyon, and his non-Type A status, the Tigers introduced Lyon to their fans at TigerFest on Saturday.

Lyon put up impressive numbers in 2007 before imploding in 2008.  In reality, he imploded in the 2nd half of last season.  Since I have a pretty good chunk of PITCHf/x data from the 2nd half of 2007 for the ex-Diamondback, let's start in July '07.

Digging around Lyon's data, asking it various questions, one thing really popped out.  And it aligns with what you see above.  A second thing also caught my eye, that is hard to directly relate to his line. 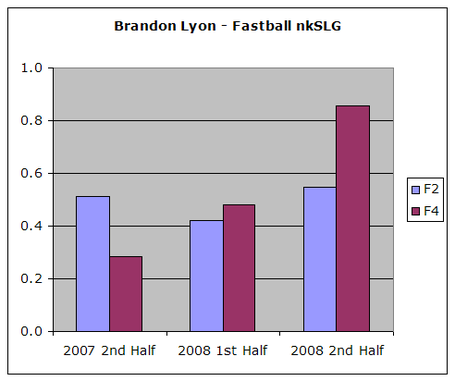 nkSLG is total bases allowed on all balls in play (including home runs).  Anything around .500 is pretty good. The two-seam stayed solid, while the four-seam went from very good to very bad. 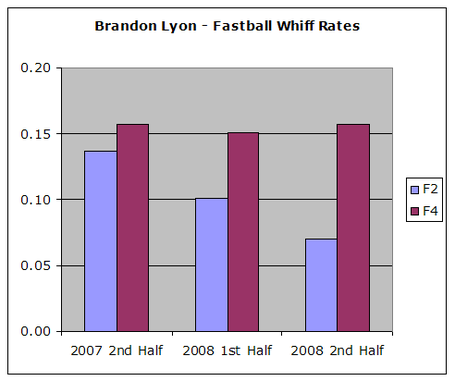 Whiff rates for fastballs are usually in the lower teens - less for sinking two-seamers.  This time, the four-seam stayed good, while the two-seam declined.  Keep in mind, Lyon's two-seamer is more of a tailer than a sinker, so this progression seems a little unusual to me.

What was going on?

Not over powering but pretty good. 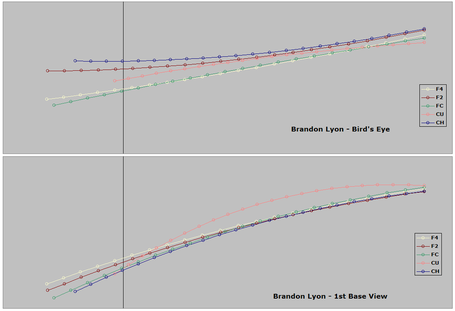 Pretty good, although the cutter is a bit of an odd bird - good whiff, but hit hard.  Small sample, too.

So, back to the fastballs - the F2 and F4.  Not only were there changes in some performance indicators across the three half seasons, but in pitch selection as well. 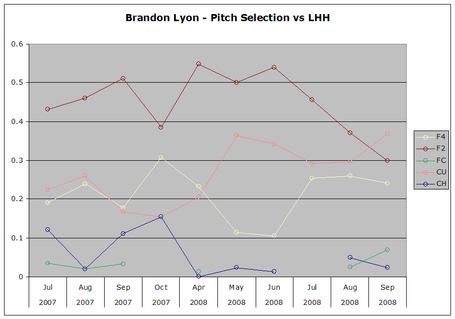 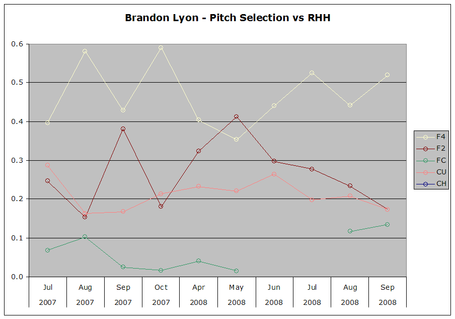 We see a decline in two-seam fastballs and some increase in four-seam, starting in May or June, depending on batter hand.  There's more.

Here are Lyon's strike zone rates - along with the "paint" or ~1 ball's width wide of the plate stacked to give you the wide/as-played zone. 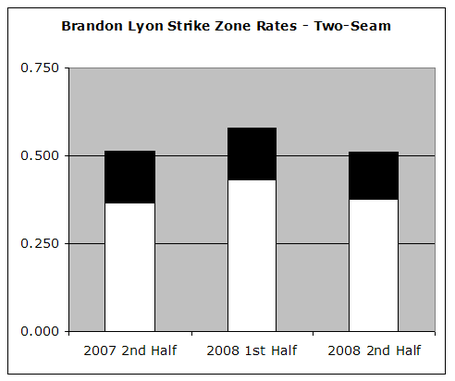 Really nothing big going on there. 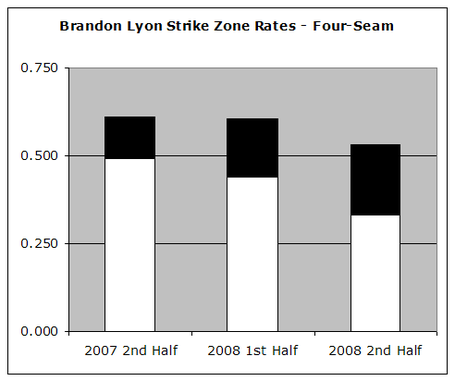 Well, that's a little more of an apparent trend.  Again, small sample sizes when you're talking about a relief pitcher by half season.  But, here's what we've got so far:

So far, we've seen a guy throw a four-seam in the zone successfully become a guy who gets crushed with the same pitch, even though he stopped throwing it for strikes.   Despite that, Lyon started throwing even less two-seamers and more four-seamers.

In Part 2 I'll dig into plate locations and outcomes.