With the news coming out that Troy Glaus could miss up to the first 5-weeks of the upcoming season while he recovers from shoulder surgery, the Cardinals are looking for third base solutions. This morning, Ken Rosenthal has a blurb that the Cards might be interested in Craig Counsell to serve as the ever popular 'stop-gap' to hold down the position until Glaus is healthy enough to play.

According to Rosenthal, the Brewers are also interested in bringing back the utility infielder for another season:

Counsell, 38, could serve as a stopgap at third base until Glaus recovers, then assume a utility role. But the Brewers probably are his first choice -- Counsell, who is married with three children, grew up and still lives in Whitefish Bay, Wis.

The Brewers made Counsell a free agent when they declined his $3.4 million club option at the start of the off-season. Brewers general manager Doug Melvin told reporters Thursday that he expected a decision from Counsell as early as Friday.

Besides the Brewers showing some interest in Counsell -- and the Cardinals now pondering his usefulness -- you probably haven't heard anything about Craig Counsell during this offseason. This surprised me a little. Of course, Counsell isn't the sexiest name on the free agent market, but even Aaron Miles landed a 2-year deal from the Chicago Cubs. Interest in Counsell has been non-existent and the question is: "Is he undervalued?"

I think he is, but first, let's check out some numbers.

When he's hitting, Counsell isn't anything special. Over his career he's shown modest OBP skills but not much else. His career line of: .255/.343/.344 will be hard for a lot of people to get past. But, much like the recent Omar Vizquel post -- and understand that Counsell's bat hasn't atrophied in the same way that Omar's has -- Counsell is a very adept defensive player in the field.

Let's check out Counsell from 2002-08 via a plot similar to the one that we used in the Omar Vizquel post. Everything in the plot is pro-rated to 700 PA's to make it easier to read. We're looking at Counsell's performance with the bat (wRAA), glove (bUZR), and overall value (OPD) since 2002. I've set replacement level to 22.5 runs. 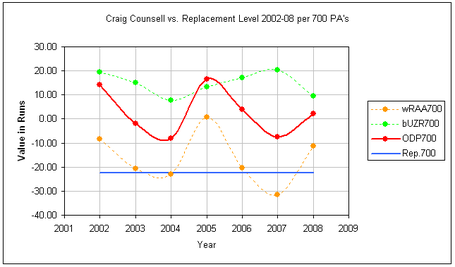 You can see that Counsell's bat -- the orange line -- dips in and out of replacement level. Out of the last seven years, his bat has played above replacement five times. It barely missed the cutoff in 2004. As we mentioned above, Counsell really shines with the leather. That's the green line. His glove has constantly been rated around +10-15 runs. I'll note here to remember that every thing is getting pro-rated to 700 PA's. I've also included a weighted positional adjustment for the positions that Counsell has been playing in each season in order to give him the proper boost for playing more than one position. Counsell has played a good bit of shortstop from '02-'08 -- a little over 2,500 innings of which the bulk came in 2004 -- and we want to make sure he's compensated for playing the tougher positions. A +10 run fielder at 3B/2B/SS isn't the same as one in left field.

What you have with Craig Counsell is a very apt defender who's not going to totally kill you with the bat. Hitting isn't his strong suit, but he should play close to the replacement level. Where Counsell really shines, is on defense. As the plot shows, even at 38-years-old Counsell should be a very good bet to add +1 win with his glove. Defense, to an extent, is still pretty undervalued in the market and thus, Craig Counsell is probably going to get dinged a little because of his hitting abilities. If your favorite team is looking for a stop-gap in the infield or a utility man to fill in at multiple positions, Craig Counsell would be an excellent addition.