The news on Wednesday included Eric Hurley being done for the year.  Hurley made his debut in 2008, a season that was cut short due to injuries.  Now he's had a torn rotator cuff repaired and won't be back until 2010.

Hurley made his first start for Texas on June 12 in Kansas City, the first of four straight outings where the rookie got past the fifth inning.   As Scott Lucas noted, Hurley would gain velocity as a game continued.  After those first four starts, all in June, Lucas, again using PITCHf/x, saw a tendency to leave pitches up in the zone, which generally meant trouble for Hurley.

On July 8, Hurley was put on the DL for a hamstring injury.  The move was made retroactive to June 30 - the day after his fourth start.  When activated on July 27, Hurley moved back into the rotation and, well, this graph from Lucas says it all. 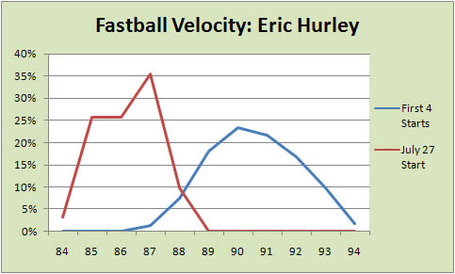 I'm going to slice up that PITCHf/x a little more and see just how poorly things went that day in Oakland.  First, I want to break down his stuff.  Starting with spin movement and the pitch IDs (slider, change, two-seam and four-seam fastballs): 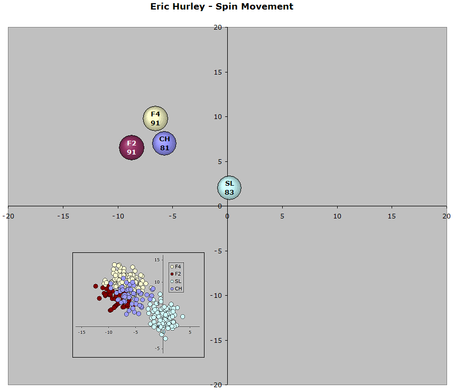 His average velocity would be higher, but more on that in a bit.  Hurley's flight paths: 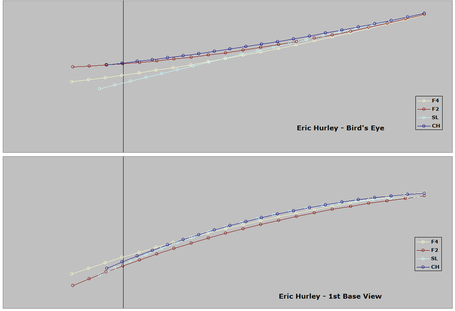 I'll let you check out Scott's for more on those pitch locations - you can see how they fall on the bird's eye view.

Here's another look at velocity - this is at 55 ft. from home plate (adjusted back 5 ft from where Gameday's data starts) and includes by release (sMPH) and plate (eMPH) speeds.

By start, and you can really see the drop here, too: 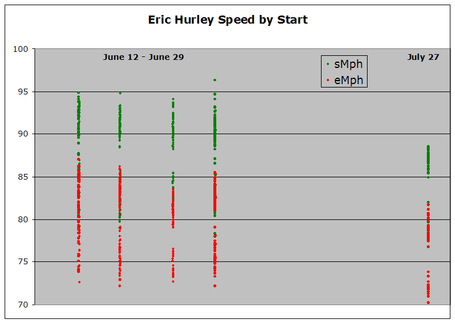 Yowza.  Now, by inning.  Hurley reached the 6th each time in June, but just the 2nd in his last start. 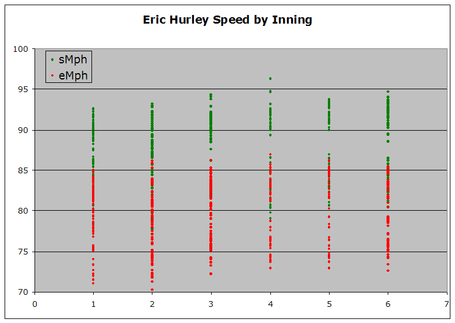 You can see what Scott Lucas noted, the increase in speed, on the whole, from the 1st to 4th inning.

Just for kicks, here are the start-by-start numbers again, but reduced to the 1st and 2nd innings. 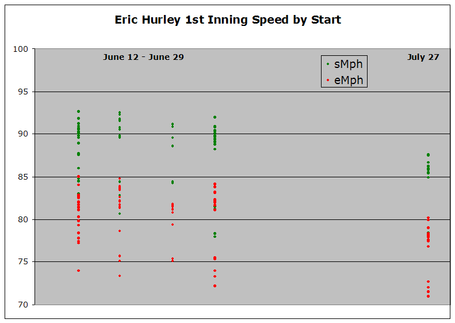 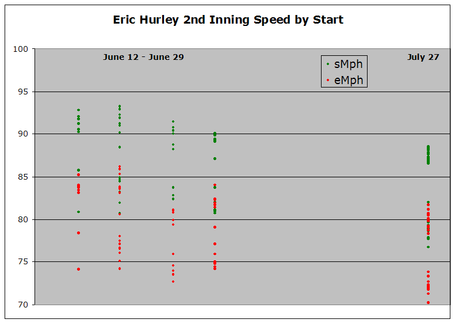 In the weeks after that final inning, Hurley got an injection in his shoulder.  Rehab followed, but he couldn't avoid the knife.  You can see the whole trail here, but here's how this progressed.

Baseball America has a slightly different version of events

he took two weeks off to deal with shoulder inflammation and, on a rehab assignment, injured a hamstring while running and missed two more weeks. Then came the July 27 start, and Hurley was done for the season.

Hurley turned 23 in September.  Did the Rangers push things by even having him start in July? By the time he was scratched for a sore arm, was the damage already done?

I don't see any signs of problems in the final June start in the velocity - but what about location?  As Lucas noted, he tended the leave the ball up in the zone. 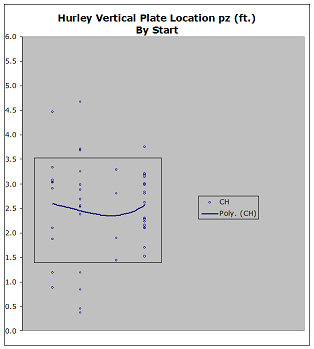 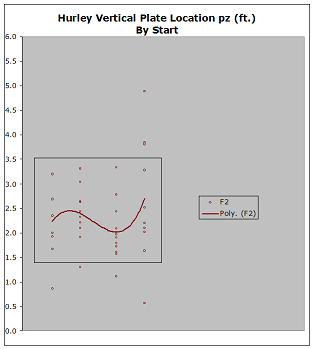 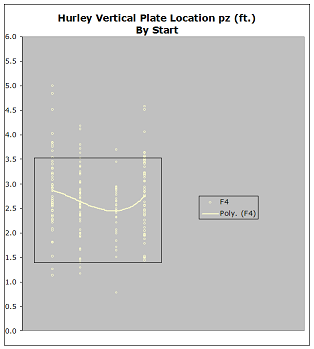 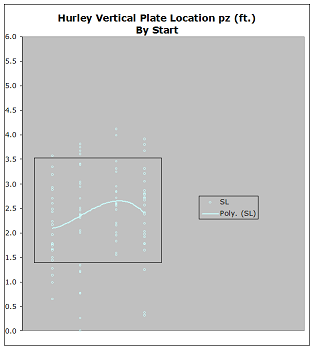 The oddest thing, to me, are the two-seamers sailing up in the June 29 start.  I'm not sure this means anything, but his two-seamer did start getting up in the zone during that particular game. 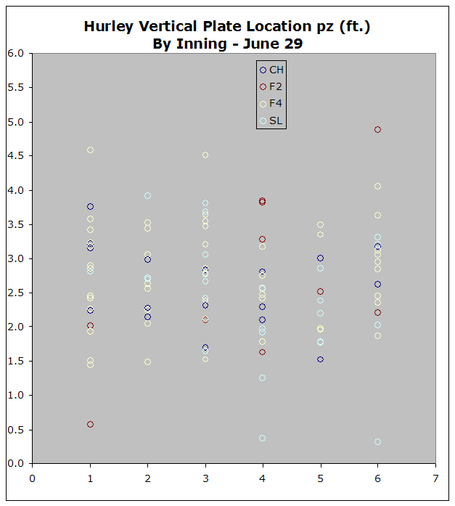 I'm not sure what that means, but it is hard not to imagine something was up.  This is like reading tea leaves, dealing with limited data.

It certainly isn't screaming "something's wrong", and thus hard to fault the Rangers (before July 21, that is).  I still think, if you know enough about the pitcher,  you can use PITCHf/x to assist in picking out early signs of injuries.  This just isn't one of those cases.