Behold, The Power of the Glove!

Share All sharing options for: Behold, The Power of the Glove!

Now that Michael Young of the Texas Rangers has begrudgingly moved to third base, the team will give top prospect Elvis Andrus the opportunity to win the starting shortstop job for the 2009 season. But, as any team would do, they've decided to bring in a veteran as insurance in case the 20-year-old prospect might need some additional seasoning in the minors. That veteran is 11-time Gold Glove winner Omar Vizquel. Yes, that Vizquel who hit: .222/.283/.267 in 2008 for the San Francisco Giants. Not many hitters in Major League Baseball were worse at the plate than Omar was last season -- KC's Tony Pena and his OPS+ of 7 holds the title of worst overall hitter. But, while Omar declined at the dish, he was as smooth as ever in the field.

That brings us to today's question: Does Omar Vizquel's glove lift his total value enough to break the replacement level barrier?

To get started, let's take a quick look at a plot of Vizquel's performances on offense and defense from 2005-2008. This should help us get an idea of where Vizquel is heading as a player. 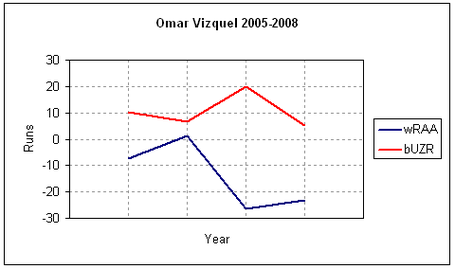 A quick note on the stats we are looking at. wRAA is FanGraphs' version of batting runs above average. It's park adjusted and the offensive measure of how many runs a player was worth by his bat alone. bUZR is the BIS data version of Ultimate Zone Rating which can also be found at FanGraphs. It's how many runs above or below average a player saved with his glove.

You can see that from 2006 to 2007 Omar crashed at the plate. He went from slightly above average in '06 to -20 runs below average in both '07 and '08. It's not entirely surprising when you consider that these are his age 40 and 41 seasons. Over his career, Omar has aged quite well but eventually, it was going to start to catch up with him. In 2007 he accrued 575 PA's but in 2008, he only totaled 300 PA's because of knee problems that delayed his start of the season.

What I find interesting is that despite his bat collapsing, he's still quite good in the field. He was a +10 defender in '05 and in '07, he saved nearly +20 runs on defense. That's amazing when you consider the peer group he's competing against. Shortstops as a group are some of the most athletic defenders on the baseball field, and Omar was still outplaying them on defense by his late-30's and early-40's. He dropped to +5.3 runs above average in 2008 but that's partly due to his reduced playing time. He missed all of April and didn't play until May 10th. His bUZR/150 -- or his bUZR prorated to 150 games -- was +13.8 runs above average.

Back to our initial question, let's see how Omar projects for the 2009 season. A few quick assumptions that I'm making:

Omar projects to nearly a +1 win player all things considered. But, that projection assumes that he'll be reaching 700 PA's, which isn't going to happen. If we adjust his playing time to around 280 PA's we get the following: .845 WAR * (.4) = .338 or +.39 wins above replacement. If we call Omar a +.5 WAR player, then he should be valued at something like $2.5M on the market. The Rangers have brought him in with a NRI contract, which I assume is for the league minimum. It's not a bad deal for the Rangers. Omar can provide some Veteran Tutoring™ for young Andrus and replacing Hank Blalock/Chris Davis with Young at third base should improve the left-side of the infield's defense.

I watched Omar Vizquel hit and field for most of the 2008 season and I think if you asked the casual fan if they thought he had any value, you'd get a mixed response. Some would see his weak bat and want nothing to do with him and others might value his defense somewhat properly. I think most would be surprised to learn that Omar's glove does help him break the replacement level and that my friends, is the power of the glove.

Edit: As per Sky's suggestion, I'm adding a plot depicting the basic replacement level and the replacement level for shortstops compared to Vizquel's performance. Everything is prorated to 700 PA's and ODP is the sum of offense, defense, and positional adjustment. Thanks go out to Sky for some spreadsheet help. 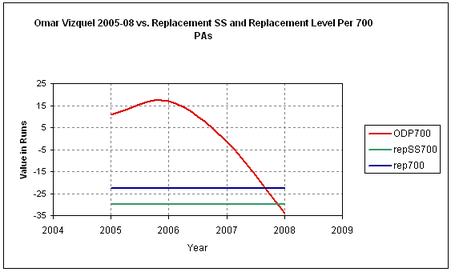 The drop off is pretty stark, but that's what happens when your bat is evaporating. Still, Omar should break the WAR threshold next season if his defense is as good as CHONE has it projected to be and his bat bounces back to the .260-.270 wOBA range.