Share All sharing options for: Book Review: A Well Paid-Slave 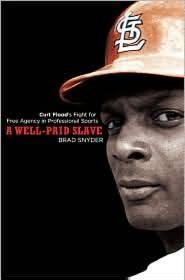 For those unfamiliar with Flood's story, he was the St. Louis Cardinals star CF of the 1960s, a 3 time All-Star, 7 time Gold Glove winner and career OPS+ of 100. On October 8, 1969 he was traded as part of a package to the Philadelphia Phillies. He refused to report to his new team though, and according to the reserve clause rules at the time if he would not sign a contract for the Phillies he would have to effectively retire at age 31. For more on the reserve clause, I suggest this article by former BtBer Peter Bendix, an excellent read in its own right.

The book chronicles Flood's life, from his beginnings in the Oakland youth baseball leagues up to his death in 1997 due to throat cancer, and everything in between. The book also includes a couple pages of pictures, including a copy of the letter Flood originally sent to Commissioner Bowie Kuhn and a picture from his interview with Howard Cosell in which Flood uttered his famous line "A well-paid slave is still a slave" from which the book's subtitle is derived.

A lawyer by trade, Snyder focuses heavily on the Supreme Court case Flood vs Kuhn, with a large chunk of the book dedicated to it. The case originally was heard by Judge Irving Ben Cooper in the Federal Court of the Southern District of New York. The trial had its share of seemingly silly moments including Cooper referring to a recess as a "seventh-inning stretch" and Flood being asked to recite his yearly batting averages for his career, which he was unable to do until one of his lawyers handed him a bubble gum trading card of himself. Two months later Cooper ruled against Flood mostly based on the stare decisis (previous courts ruling) on Federal Baseball Club v. National League, upholding baseball's anti-trust exemption from more than 50 years ago.

Surprisingly though, Flood's case did not end there. The Supreme Court decided to hear Flood's argument, and in 1972 the trial commenced. The Court ended up ruling 5-3 against Flood (1 justice refused to comment as he held large stock in Anheuser-Busch, who owned the Cardinals), primarily on the basis of stare decisis yet again. This even though most of the Justices who voted against Flood agreed that baseball was interstate commerce, which would thus violate the anti-trust exemption which was the basis of their ruling against Flood. It makes little sense to me, but then again I'm not a lawyer.

Regardless, I still found the whole case to be very interesting, especially helped by Synder's writing style which is both concise yet informative. While the book is not a Sunday afternoon read (clocks in at 480 pages), it is well worth the time.

Curt Flood, as the book shows, was far from a perfect man. But his fight for professional freedom in sports should be something all of today's multi-millionaire athletes are grateful for. A Well Paid-Slave is an excellent book on his plight and one I highly recommend to all baseball fans.