Share All sharing options for: Randy Wolf - Fastballs Against Righties

Randy Wolf, like many starting pitchers, regularly uses two different fastballs.  The four-seamer and the two-seamer are both important tools for Wolf.

I took a look at Wolf a few days back over at Cubs f/x, as Chicago is one of many possible destinations for the free agent lefty.  I left off at this point:

Two Most Likely Pitches by Situation and Batter Hand

This raises some questions about how effective he is, same metrics as above, but by batter hand/situation. If the Cubs actually sign the guy, I'll take look at that.

I'm not going to wait for him to sign - let's dig into that fastball selection against righties.  First, broken down by specific count.

A graph might help, too.  First, let me explain what you're about to see.

To create this graph, I simply took the total # of pitches by count for right-handed batters.  That gave me a sample of 3,197 pitches.  About 1,355 were something other than a fastball.

To sort the graph, I took the difference between the two-seam and four-seam rates and put the "more two-seamers" as the top.

Here's what I ended up with. 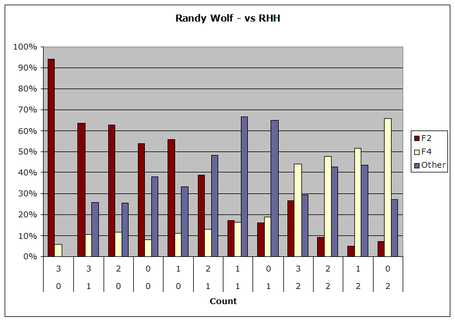 The two-seam prevails when there are no strikes.  Unless it's 3-1, the one strike counts get more off-speed and breaking stuff.  With two strikes, the two-seamer fades away in favor of the four-seam.

Keeping the same sort, here's a look at where those pitches go. 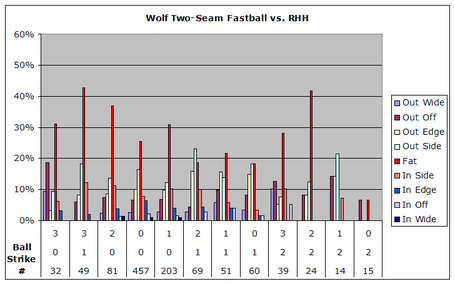 Keep in mind, a left-handed two-seamer naturally moves outside on a righty (more than the four-seam by a few inches), and you see a fairly consistent lean to the outside in this slicing of the zone.  On the 0-2 counts, where Wolf almost never goes to the two-seam, he also consistently misses the zone up or down (the "other" bar, which is not plotted).

This is his strike zone plot, all counts, catcher's view. 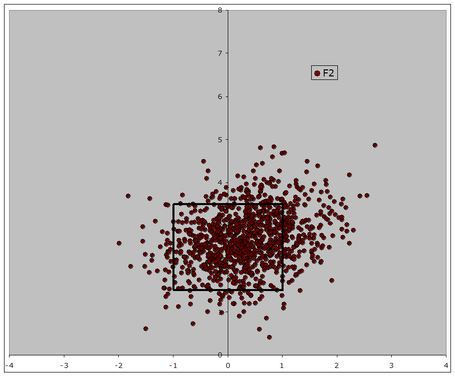 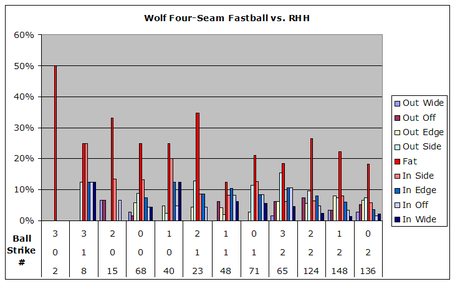 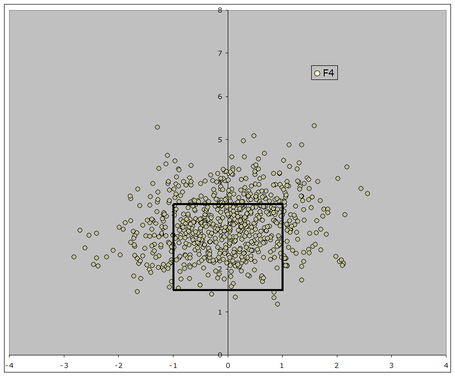 That's much more even distribution, as you can see in both charts.  Wolf also keeps the four-seam up more than the two-seam, which isn't exactly used to pound the lower half, either.

The biggest difference between four- and two-seam fastballs for Wolf is the inside location.  He'll hit it, and well inside, with the four-seam but not the two-seam. 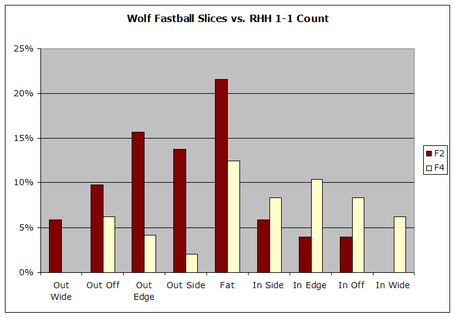 Notice the four-seam's outside slices - we're not talking about a big sample here, but the Wolf's tendency appears to go well outside, if outside at all. 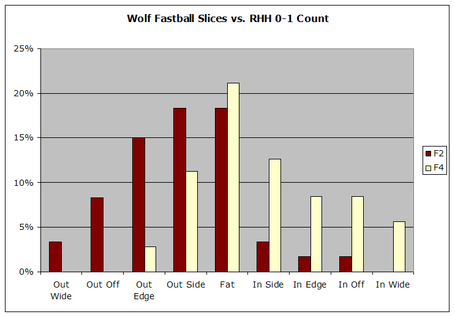 With an 0-1 count, Wolf is more aggressive with the four-seam fastball, but moves the two-seam even further out.  Again, limited sample, but a tendency, perhaps.

To give this some context, here are some numbers from a much larger sample of pitchers (33k four-seamers and 23k two-seamers):

Both pitches are fatter than average, and Wolf throws a ton of strikes with the two-seamer.  Wolf's percentage of four-seamers that are not just strikes, but fat strikes (FIISZ) is on the high side.  That's a result of the slightly below average ISZ and above average FatIns.

What's off kilter is Wolf's two-seam is more of a strike pitch, while, for most other pitchers, it's the four-seam.  With the exception of FIISZ, Wolf is the opposite of the "league" sample.

Balls in play and their outcomes.

The four-seam does get more swings (and chases out of the zone, BTW) and is tougher to put in play.  Factor in the swing rate, you end up getting as many balls in play from either pitch (In Play/Pitch).  The two-seamer actually gets hit a little bit harder, which is not what I expected (see point #3).

Wolf has pretty distinct ways of using his two fastballs, and ends up with a bit of an atypical profile in the process.   So, he ended up being a decent case study and playground for some of my new toys.