Continuing with Sky's Saber-Friendly Blogging 101 Series, this installment will focus on an issue of baseball sabermetrics that is likely gaining popularity not only on the internet but major league front offices as well; at least by judging the contracts handed out to players like Pat Burrell and Jason Giambi this offseason. I'm talking of course about defense.

I guess I should make a bit of an introduction first. My name is Graham Goldbeck, and I run the blog Oaktown Awesomer's. My contributions to BtB thus far have pretty much just been Oakland A's MS Paint drawings. But my true role besides the occasional story is sort of a quasi Fanshot director. So if any of you out there have an interesting blog which I can read and post links to when I find interesting articles/pictures, go ahead and post a link below or shoot me an email with a link, my email is at the bottom of the site.

But back to defense, and how it has been quantified over the years. For a long time, probably all the way back to Henry Chadwick's invention of the box score, the statistic which players' defense was measured by was the big E, or errors. Many a contract and/or Gold Glove was handed out based on the fact that (insert random player) committed the fewest errors or had the highest Fielding Percentage, so he must be an awesome fielder. But is this really true?

No. Well, there probably is some correlation between a player's number of errors committed and his fielding ability, but it is no where near as strong as it has been made out to be over the years. Just a quick anecdotal problem can show why this is false.

Say you have two 2B, one with exceptional range who makes the occasional poor throw to first base. Then you have another 2B with awful range but who makes perfect throws to first base everytime. 100 balls are hit in in the exact same way to both fielders in 300 innings. The first fielder fields 88 of them but makes 5 errant throws. The second fielder fields 58 of them but throws them all to first cleanly. Which 2B would you rather have? I would hope everyone said the first, as he's the much better fielder. This is just one reason why errors are very problematic in evaluating defense, and I haven't even addressed things like Official Scorer Bias (when is an error an error?), or that all errors are certainly not equal.

The situation I posted above is another defensive statistic that has been around for a while, Range Factor. Created by Bill James, it's simply Assists + Putouts / Innings Played. While its an improvement over errors, it too has glaring problems, like favoring infielders on teams with groundball heavy pitching staffs (they'd have many more opportunities for fielding plays) or players on teams with very low strikeout pitchers (more balls put into play).

Another stat which can be useful in evaluating team defense is the Defensive Efficiency Rating (DER). This is how many balls that are put into play are turned into outs. The quick and easy was to do this is 1- Team BABIP, but the full formula is:

It is helpful in measuring team defense, but again falls short, in this case by favoring teams with flyball heavy pitching staffs (less likely for a flyball to go for a hit unless its a HR, which is subtracted from the equation) and assuming all balls hit into play are equally likely to be fielded.

But the search for defensive evaluation has kept evolving, and has manifested itself most recently -especially with the aid of play by play data- in zone based defensive ratings. In a zone rating metric, there are general areas in the field of play a given fielder is "responsible" for fielding balls in. 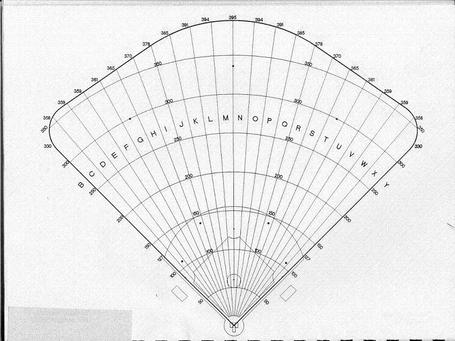 This is the STATS Inc. Zone Rating Grid, which the Zone Rating (ZR) defensive statistic is based off. I mention STATs Inc. because their baseball charting data is different than that of Baseball Info Solutions (BIS), the other large baseball data provider. More stats are based off the BIS data, including John Dewan's Plus/Minus (subscription to Bill James Online needed), David Pinto's Probabilistic Model of Range (PMR) and Michael Lichtman's Ultimate Zone Rating (UZR).

Each of these systems has their own pluses and minuses (haha!), and I won't get into a large debate about them here. The important thing they all do that ZR does not is adjust for balls in a given zone that are not considered fieldable (whether it by by location, speed, trajectory, etc). How they do that I believe varies by system.

These systems have their own shortcomings too, they don't address an outfielder's arm strength or infielders ability to turn a DP. But they are currently (as far as I know) the best defensive stats publicly available.

Ideas for a team specific article:

To get things rolling a bit for discussion, here's a chart of a bunch of various defensive statistics teams compiled in 2008.

If all this defensive info still sounds like mumbo-jumbo, one stat which everyone can get involved in is Tom Tango's Fan Scouting Report. In fact Tango doesn't want you using UZR or RF or even E in this stat, just what your eyes tell you. Just like almost any stat it only becomes more and more reliable with a large sample size, so go on over and vote.