A Thought on Penny

Share All sharing options for: A Thought on Penny

The Red Sox seemed to have taken a good risk by signing Brad Penny.  When he's healthy, he's an impressive power pitcher.  By that, I mean 2008 was not impressive.

One of the things that struck me is the increase in home runs.  Since I've been playing around with some new ideas on pitching analysis, I figured I'd run Penny out as a trial balloon.

I've picked 5 metrics to use for a look at Penny's fastball. I'm interested in the trend by month since 2007 using all the available PITCHf/x data on Penny.

For reference, I've included the # of fastballs, along with their average velocity, for each month.  This is critical, because the September data is limited to two relief appearances.  So, the sample is small, but does reflect the horrific performance. 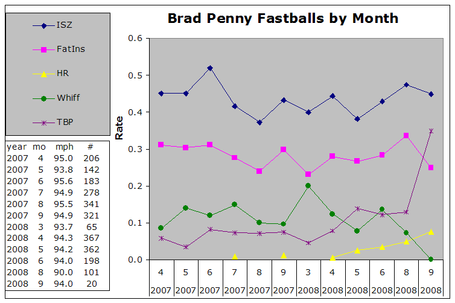 In a nutshell, he lost some velocity, missed less bats and got hit harder.  Shocker.

Not like anything of note is shown above on it, but the relationship between ISZ and FatIns is of interest to me.  If pitchers can throw strikes, but keep the ball either well inside or outside "enough", they'll have more success over time (and I'm not yet considering height).  The percentage of strikes in the FatIns area is close to 2/3 from what I've quickly checked so far.  Anyway, back to Penny.

What matters for Brad is just the last three lines.

Penny's TBP suddenly hopped above league average in May, and sky-rocketed in the two relief appearances.  HR rate when from zero, and/or virtually zero, and started climbing and driving that TBP at the same time.

It's hard to take much from the whiff rates, other than August and September fall below any other month covered.  So, I wouldn't exaggerate the meaning of September's garbage, beyond it continuing the trend.

Now that's he's healthy, the question is will he indeed return to pre-injury levels, and for how long.  The Red Sox only put a bet down for a single year, and that seems good all around.