Travis Blackley is not Randy Johnson

Share All sharing options for: Travis Blackley is not Randy Johnson

It should go without saying, but the Diamondbacks did not bring Travis Blackley to Arizona to replace Randy Johnson.  Blackley is a southpaw, and historically a starter, but a rotation spot doesn't seem to be in order.  The Australian got a split deal, which will pay just over minimum in the majors.

Unfortunately, it needs to be said - Blackley is not Johnson's replacment, no matter what management blathers.  At the link, Jim McLennan talks about Blackley being out of options, but a worthwhile flier for almost no cost.

Blackley was injured, but has been said to be regaining his lost velocity.  It hasn't gone all the way back, based on reports out of the Caribbean, where he has pitched alright this winter.

Based on CHONE, Blackley projects to somewhere around replacement level.  If I were to bet, he starts the year in a AAA rotation.  There is a little bit of data in PITCHf/x, from two non-stellar starts in 2007 as a Giant.

In those games, he appears to only use a four-seam fastball, along with a change-up, cutter and curveball.  Before you look at these numbers, remember, he has picked up a couple more MPH since 2007.  And this is just two games. 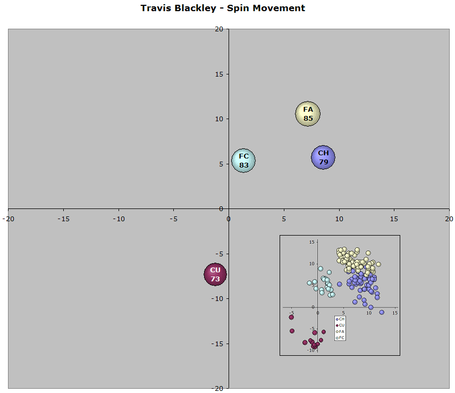 The release point is skewed on the curve - he does release it " more overhand", but not as much as these flight paths indicate. 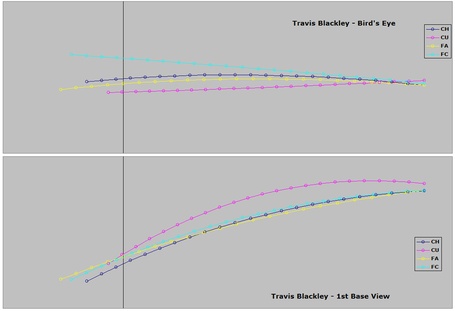 Blackley, despite lacking velocity, has decent stuff.  He's a longshot as far as making any type of significant impact in the majors, though.  His track record says the upside is pretty low - he's no longer a top prospect.