The story certainly hasn't come to a close, but the Yankees and Andy Pettitte are leaning towards parting ways.  New York has enough depth to stock the #5 spot with a few arms, starting with Phil Hughes.  Hughes has been mentioned frequently as the top choice to take the slot behind CC, AJ, Wang and Joba.

After Hughes the Yankees have Ian Kennedy, Alfredo Aceves, Dan Giese, Chase Wright and Kei Igawa.  Sure, not a whole lot of exciting options there, but we're talking starters five through ten.  And there are probably some other names Yankee followers could add to the list.

Before I get into the available PITCHf/x on these guys (sans Wright, no dice), let's all refresh ourselves on what a 5th starter really is.

First of all, the fifth starter will end up being your third at some point in the season.  Injuries, rain outs etc.  Clubs usually end up doling out starts to plenty of guys.

The Yankees have used at least 12 starters in each of the past five seasons. Only once did they get by with just five making double-digits - and that year, Corey Lidle made nine starts after coming over from the Phillies in a late-season trade. Lidle was tragically killed in a plane crash not long after the season ended.

So, depth in the rotation goes beyond the 5th man - which, one could argue, suggests the Yankees should bring back Andy Pettitte.  You can never ever ever have enough starting pitching.  Ever.  Well, you always can fallback to Sidney Ponson, I guess.

What is a 5th starter "expected" to do?  Thankfully, David Pinto took a look at the 5th starter "impact" back in January.  Pinto's methodology is detailed at the link, which I encourage you to check-out.  Basically, the "#5 starter" is a collection of guys, averaging 37.7 starts per team, which actually fits within the context of this post.

Here's what he found.

I'm not going to calculate 2008 numbers in this post, but, you get the idea.

For this post, 6.00 is too high a target.  I'm really just talking about the 5th starter ERA from the 5 or 6 best guys who will fill the slot - not all 10 or however many.  Crudely guessing, I would expect the Yankees to target an ERA around 5.00 for "best of the rest".

So, the question now is this: Do the candidates (Hughes, Kennedy, Igawa, Giese, Wright, Aceves) have projected ERAs under 5.00?  Given the short track record of these guys, I've been advised to take these things with a big grain of a salt.  To make things simpler - and at least slightly credible - I'm sticking with CHONE, since it uses minor league numbers.  Still, especially with Aceves, this isn't enough to go on.

CHONE lists a bunch of better options (projection-wise) than Wright.  Giese is projected as a reliever - tack on a run and he's pushing 5.00.  Hughes and Kennedy project the best as starters, and actually may look good if they are the 5th and 6th guys to reach double-digits in starts.

Igawa and Aceves also pass the crude hurdle I've created - an ERA projected below 5.00 and some PITCHf/x data.  Chase fails on both criteria, but Giese passes on to the next round.

Assuming Pettitte is gone, you have, based simply on CHONE, two solid candidates for the job, two guys to provide depth, and a reliever who can fill the job when needed.  So far, the Yankees are off to a good start, even without Andy.

But, again, there's only so much you can base on these projections.  How do they actually pitch?  What else do we know about these guys?  Aceves is the least well known, so I'll spend some extra time on him.

Alfredo Aceves was signed out of Monterrey in February and flew through the minors in one season.  Which is about right, since he's now 25 and has six years in Mexico - which is supposedly close to AAA.  Aceves threw a one-hit complete game in AA, and also had at least four complete in his Mexican League career.  He's a real starter.

Here's a clip of Alfredo throwing a pitch:

And his stats, as far back as I could find.

Aceves doesn't have overwhelming stuff, but he does have three pitches that he'll miss bats with, thanks to a good cut fastball, and he'll throw them on any count. 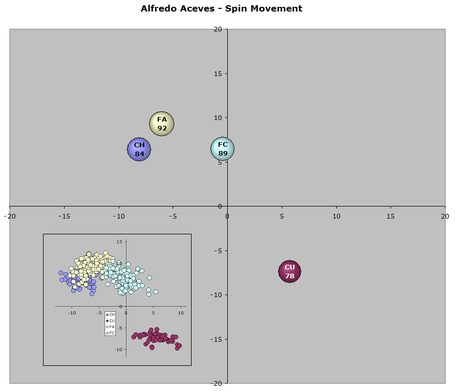 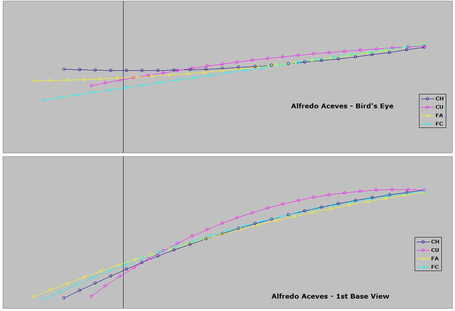 This is pitch choice by "situation".  Not as precise as count-by-count, but a little easier to digest.  The five groups are mutually exclusive - "even" only includes 1-1 and 2-2 while "behind" excludes the 3-2 count, covered, obviously, as "full".

Aceves comes with good stuff, but questionable control.  That seems to lessen the effectiveness.  He appears to mix up his pitches very well, so, with a little luck, and avoiding a few more fly balls, a sub 5.00 ERA is not out of the question and possibly a fair guess.  I think he has even better upside, as he's still young and has a fair amount of experience behind him already.

Dan Giese was a 30 year old rookie for the Giants in 2007, and never started games as a pro until 2008, when Giese started 10 games for Scranton plus 3 for the Yankees.  He's a two-pitch guy, so it is impressive that he can take the ball and start at this point of his career.  Impressive or a bad idea.  One or the other. 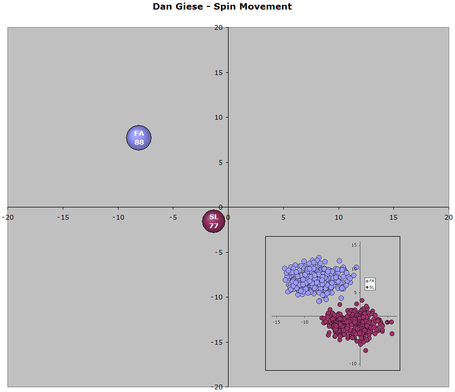 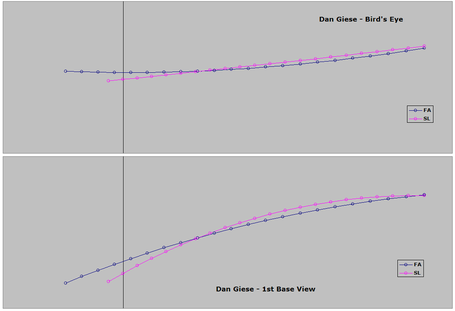 Does this flight path make my slider look slurvey?  No, it's just that you don't throw it hard - gravity drops it, not spin.  And, at 76 mph, there's plenty'o'time for gravity to work on it during the trip.

Considering the throws that slider so much, and gets a pretty normal swing rate out of it, that's pretty nasty.  That's a sloooow pitch, but may make his 87 mph fastball pop a little.

Obviously, with only two pitches, you have to mix it up.  It is hard to take this guy seriously as a starter - how can he be expected to attempt a third trip around a line-up on a regular basis?  But he looks like a good guy to have on the pen, and handy in an emergency.

Phil Hughes is the obvious guess for the job.  He's not only a well known baseball card collector - he's also a Yankees prospect.

Hughes struck out 38 in 30 innings in the Arizona Fall League in 2008.  He also walked 13 and hit 3 batters, but showed he has the stuff to succeed in what is typically a hitters league.

Phil was banged-up in '08, and was in the AFL to get extra innings - according to Mr. Hughes himself.  Healthy and ready to go for 2009, he is the front-runner, ahead of Ian Kennedy (more on Ian in a bit).

That's a very good slider, in terms of movement, and the fastball/change-up contrast is nice (on paper). 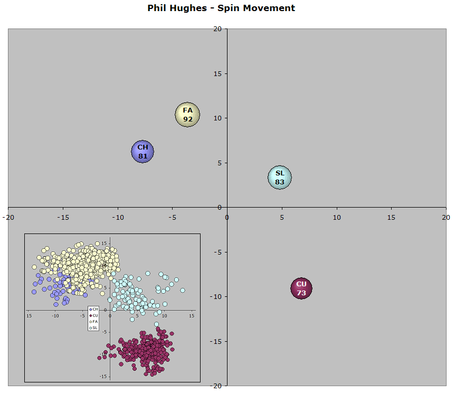 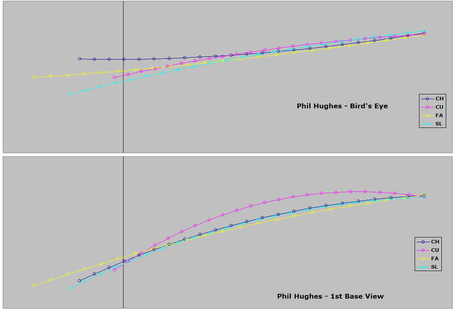 Hughes has a good, maybe avearage, change-up, but doesn't use it against righties. That would be an issue, but, the slider does bump up to a whiff of 0.242 for RHH.  It's literally 0.0 for LHH.

The slider and curveball control - in light of the movement - is impressive,  I suspect that balances out their low whiff rates.  This is not a power pitcher, but he has "enough" velocity.

He really likes to throw that curveball, and has confidence in it.

When running down this list, I nearly skipped Kei Igawa.  A couple of times.  I'm thinking about it now.  The Yankees have not managed to trade him so far and seem somewhat less than enamored with Igawa.  Including the posting fee, Igawa has cost the Yankees about $46 million.

After a good career in Japan, the only thing going for Igawa now is his left-handedness.  Chase Wright is also a lefty, but Igawa is probably still ahead of Wright on the depth chart.

No one ever said Igawa threw the ball hard. 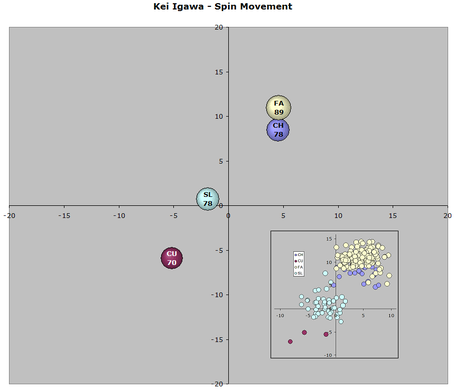 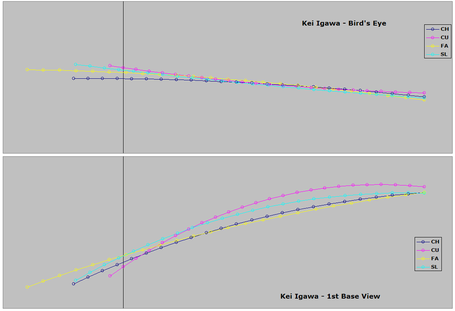 Well, he's basically down to two pitches - I'm not sure what the point of the change-up is.  No one bothers to chase it, and, amazingly, no one's missed it when they offered at it.  The curve is rarely shown, and will make for some misleading pictures below.  Igawa's fastball is not impressive, either, and I'm not just talking about the velocity (or lack thereof).

This is a very small sample, but, in his major league games, Igawa's change-up has been lousy, and he seems to like using it early in the count.  That pretty much ensures getting behind - or getting back to even when already ahead.

Considering how blah his fastball is, the fact that, even on full counts, he throws it 80% + when behind is dangerous.  If I'm the Yankees, I try and turn him into a LOOGY, cost be damned.  I'm not sure he'll be worth anything as a starter, but he may succeed as a fastball/slider guy out of the pen.

Ian Kennedy shouldn't be forgotten.  He has not succeeded as expected, but showed signs in Puerto Rico this winter.  That said, his stuff and control are both a step below Hughes.  I may actually prefer Aceves to Kennedy, based on their stuff. 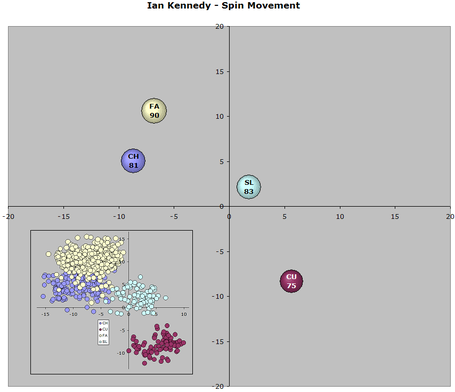 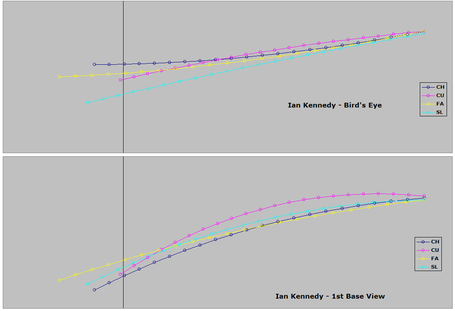 These are very small samples, where luck can prevail. But Kennedy gave up twice as many home runs per fly ball, suddenly allowed some infield hits, while flip-flopping his ground ball and line drive rates. The BABIP tells a story, too.

While Ian Kennedy has had some crazy luck, in both directions, and carries a first round pedigree, I just don't see him having the pitching ability that Phil Hughes seems to possess.  If it all matters, Kennedy appears to simply have had better luck again in Puerto Rico, not really out pitching Hughes' Arizona line.  Oranges and apples, but something to store away.

Alfredo Aceves is a very interesting dark horse.  Dan Giese and Kei Igawa belong in the bullpen, while Chase Wright and several others probably just aren't ready, and will fill probably one of those 11th-15th starter spots as the seasons stretches out.

So, I'm probably full of it, but I suspect the break-down will be clearly in Hughes' favor when the smoke settles in March.  Kennedy and Aceves, however, deserve a shot.  If I'm the Yankees, I'm not sure I'd spend $10 million on Pettitte.  I'm pretty sure I'd take a pass.  Will they?