Share All sharing options for: 2008 Pitcher of the Year - Jorge Sosa

No, I'm not kidding.  Jorge Sosa won the award for this winter's work in Liga de Beisbol Profesional de la Republica Dominican.  This is the same guy who just signed with the Nationals, a minor-league deal, despite being on the restricted list for amphetimines (he'll miss the first 50 of 2009).  El Lanzador del Ano starts tonight for Licey in the first game of the DWL's round-robin playoffs.

Sosa only uses two pitches against righties, adding a change-up to his slider/fastball combo against left-handers.  This makes him questionable as a starter, and he most certainly projects as a reliever, if anything, for 2009.  He did make some starts in 2007, but stayed in the bullpen in 2008 - at AAA, too.  Now, he's the best pitcher in the league and the ace of the premier team.

Here are Jorge's stat lines from 2008, with the Mets and Licey, along with his Marcel.

Marcel expects him to bounce back from a rough season. This winter, however, one thing certainly raises an eyebrow - his K rate is below 4 per 9 innings.  Plus, in Sosa's ten starts (he made one relief appearance), he's averaged just over 5 innings.  I guess his lucky ERA is enough to get a trophy this time around.

So, what have the Nationals gotten themselves into?  Jorge Sosa relies on his slider, to the extreme against righties, but none of his stuff is "+", IMO.  He does throw the slider for strikes, I'll give him that.

Let's put that first set of numbers into pictures 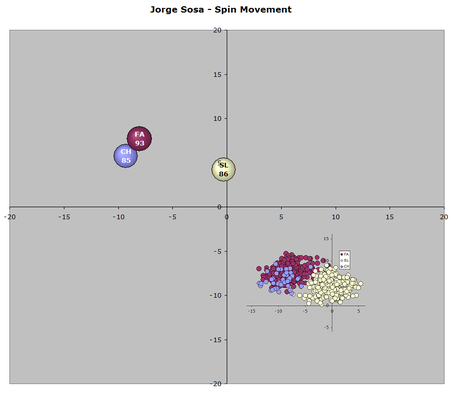 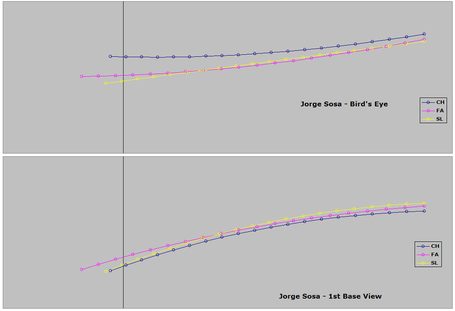 As you can clearly see, that change-up is something that is kept well outside (remember, he only uses it against lefties in the sample PITCHf/x covers). 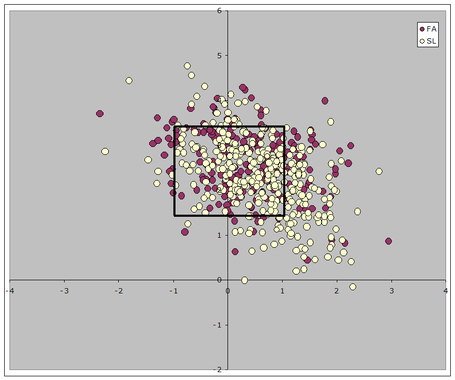 Sosa has middle relief written all over him.  I'm pretty amazed at his success this winter - hopefully Washington won't be fooled by it.  They'll certainly have a long enough cooling-off period.