Over the next few days, I'll be taking a look at some of the hot stove moves around both leagues.  I'm starting off with Heath Phillips, recently signed by the Royals to a minor-league deal.  KC is in acquisiton mode, and this signing barely made a wave.  Nor should it have.  I'll over analyze him anyway.

corrected B/9 to read K:BB

Marcel projects this line.  I've doubled his playing time, as projected, for convenience.

Who is this guy, anyway?

Heath Phillips is a big lefty from Indiana.  The White Sox took him out of high school, and he had a cup of coffee in 2007 as a 25 year old.  That was it, and he became a minor league free agent.

Signed by the Yankees, Heath pitched AAA ball in 2008 for the Bombers until he was released in July.  Picked-up quickly by the Rays, he finished the season in Durham.

The spin movement clusters can be read a bit to determine the pitcher's arm slot (see some earlier work on Barry Zito and John Smoltz), and it looks like Phillips is below 3/4.  Also, the height of the ball 55 ft. from home plate, coming from a 6'3" pitcher, isn't exactly on the high side. 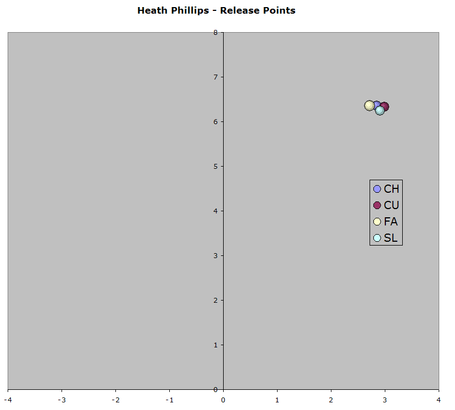 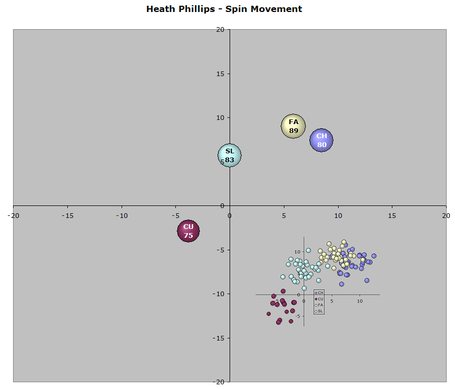 His flight paths give you a sense of his stuff. 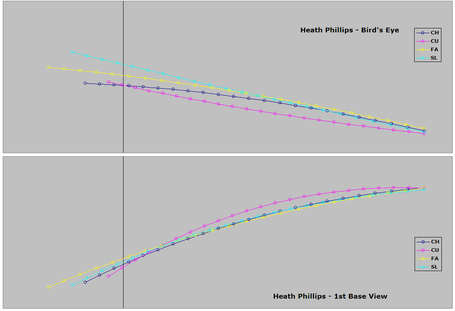 The sample is small (just over 100 pitches), but I'm still struck by the consistent plane on the first-base view.  The curve has the hump, of course, but the other three are awfully close.  If that's indicative of reality, it could mean he's tough for hitters to read.

Having the set of four pitches - plus he probably mixes a two-seam with a four-seam fastaball - nudges Phillips away from LOOGY and towards starter.  And he throws all four to both LHH and RHH.

That "slider" may be closer to a slutter/cutter, maybe.


This is a strange one.  Sure, just six games, and 111 pitches, but an exceptional whiff rate on the fastball, accompanied by noticeably low rates on the secondary pitches.  Looks backwards.  Does he pitch backwards, too?  Worth looking at, despite the fact that the B:CS ratios are also upside down.  Smells like an insufficient sample - but what the heck, why not.  Something to look for later on...

Looks backwards to me.  31 first pitches and the mix is almost even.  Only four 2-0 counts, but no fastballs.  A change on both 3-2 counts so far.  Again, if those flight paths mean anything, and if these pitches-by-counts mean anything, he's relying on deception and guile.  Again, very limited data, but he's starting to look like a nibbler.

On that note, strike zone plots. 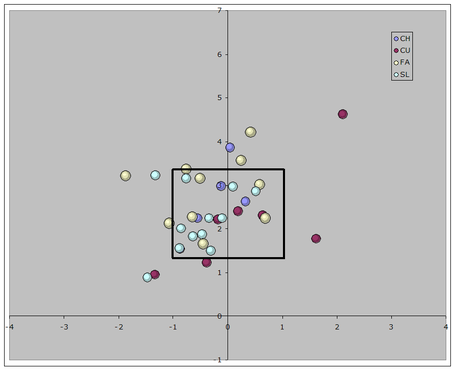 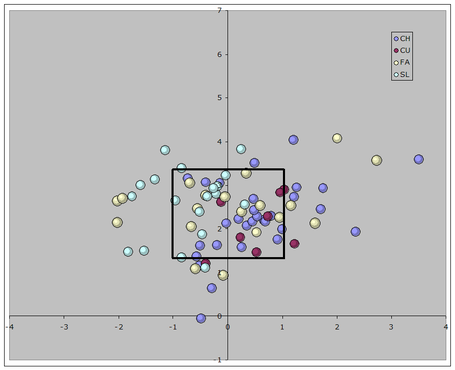 Well, he's not nibbling against lefties.  Or at least he wasn't in September of 2007 (this is why I yearn for data from minor leagues).  There are two or three nice groupings in there, too.  Against righties, he was able to get a curveball slung in there low and away - for a strike (or close to it).  That's actually quite nasty.  Against lefties, the down/away vs. up/in mix is pretty smart - if you go by the conventional wisdom of not pitching lefties down and in.  Still, I would not describe these six outings as being indicative of a bold pitcher who takes control of the inner half.

Phillips' plate scatters also give you a sense of arm angle.  Check-out some of this stuff at Harball Times, under Matt Lentzner and Mike Fast.  Mike has an amazing flight path plotting method that I need to steal.  I keep saying that, and someday I'll mean it (the stealing part, I already mean the amazing part).

So, there you have it.  Heath Phillips.   Not a bad pick-up, could be a useful swingman or AAA depth.