Who's Left? A Look at the Free Agent Market.

Share All sharing options for: Who's Left? A Look at the Free Agent Market.

As the Winter Meetings move behind us, the free agent market is still taking shape. Players, GM's, and agents are all working around the clock to improve their teams by adding talent from the free agent market. The question remains: Who's left? And how much could they help their prospective teams?

In today's post -- the first in a series -- we'll be looking at who's left on the free agent market by position and how they project for the 2009 season. Let's get started.

Because we're interested in seeing who's still available for teams, I wanted to break the players down into sections by positions. Today we'll be looking at free agent catchers and first basemen. In following posts we'll examine the positions of: second base, shortstop, third base, left field, center field, and right field. The group of free agent DH's is pretty small, so in that case I'm going to stick them at their most likely position. For example: Jason Giambi will land in our first base list despite being a DH in recent years -- though, he did play over 100 games at first in 2008.

My list of free agents by position is courtesy of MLBTR. Their list looks solid, but if you think I missed someone -- or added someone who doesn't deserve to be there -- leave a comment and I'll fix it. Sometimes it's hard to keep up with all the players and it always seems that I'll miss a player or two.

So, we'll be looking at players by position but how will we compare them? I decided to keep it simple and compare the players by ISO and OBP, the two most essential qualities for hitters. The ability to get on base (ie: not make outs) and to move teammates around when they are on base (ie: hitting for power). ISO, or Isolated Power, is a measure of a hitter's "true power". The formula for ISO is simple, it's (SLG-BA = ISO). Batting average judges every hit as a single and ISO removes BA from the SLG equation. Everyone is familiar with on-base percentage.

In order to project the 2009 performances of our group of free agents, I decided to use the 2009 Oliver Batter Projections. The 'Olivers' are built on the framework of  Marcels. Marcel is a very basic projection system and Oliver adds some sophistication -- using minor league data, park adjustments, age adjustments, etc -- to the framework. Availability of data is another reason I'm using Oliver. You can download the entire hitter projections in one spreadsheet. After going through the Oliver projections, I've pulled out the projected 2009 ISO and OBP for each free agent. Then, after pulling the data, I've plotted each in terms of ISO and OBP.

A quick word on the plots. The horizontal and vertical red lines indicate the 2008 positional league averages for ISO and OBP. The horizontal and vertical blue lines indicate the 2008 league averages for ISO and OBP.   This divides the plot into four sections. The lower left section indicates hitters with below average power and ability to get on base. You don't want to be in the lower left quadrant. The upper right quadrant is the most desirable placement as it indicates hitters with above average power and ability to get on base. The horizontal and vertical league average lines will most likely be different in 2009 -- remember I'm using the 2008 averages -- but nothing drastic. Offense has trended down the last few years and they might swing a couple of points in either direction. But, for our purposes, our averages should be close enough to evaluate these players. 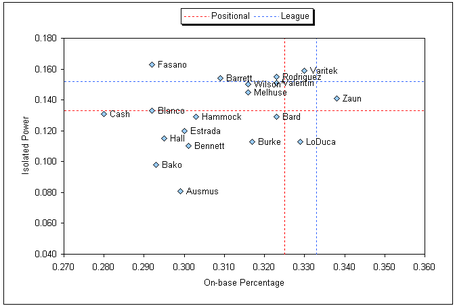 Some thoughts about the 2009 FA class for catchers: 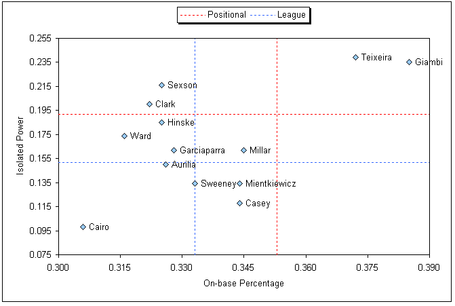 Thoughts on our first basemen group:

In the next post, we'll be looking at free agents for the positions of second and third base. Stay tuned.