What's All the Fuss? Part 2

Share All sharing options for: What's All the Fuss? Part 2

Part 1 took a look at Daniel Cabrera and his stuff.  Now we turn to another pitcher who has received a notable amount of attention this off season - Derrick Turnbow.  In Turnbow's case, the "stuff" as the reason for that attention makes a more compelling case.

You can check out Part 1 for some basic definitions - and overall averages - for some of the metrics I'll present here.

Hard throwers with a reputation to save games are almost always in demand.  Let's look at Turnbow from 2005-2008, plus his 2009 Marcel projections (all from Fangraphs.com).  I'm going back that 4th year since he barely pitched in 2008.

Derrick Turnbow is a big righty - 6'3" - and throws hard.  He'll strike guys out, but he'll walk them like crazy, too. So, what's he throwing?

That change is a rare treat, and will be left out of the analysis, for the most part. The SV is a slurve, which is what Turnbow calls it. Probably more towards the slider end of the spectrum, thrown overhand. Actually, he may be more over-the-top with the slurve than the fastball. That fastball is mostly a four-seamer (that naturally "cuts", but I think, again, that's mostly arm angle), but I believe he's thrown two-seamers on occasion.  More on those release points in a second ....

The sample for 2008 is limited, but he lost some velocity.

He was still throwing hard, and we'll see if he recovers his velocity in 2009.  BTW, if my speeds look higher than what you see elsewhere, they are.  That's because I've adjusted it back to 55 ft from home plate.  What is typically shown, either on Gameday or on a radar gun, is more like 40-50 ft. from the plate.  Also note, in PITCHf/x, the release points are volatile/noisy as are the start speeds.  End speeds (mph at home plate) tend to be more stable.....but I digress....back to release points.

The inset below shows only his Miller Park games, for illustration purposes (eliminated park-to-park noise).  The difference in fastball and slurve release points is consistent game to game, and park to park etc. 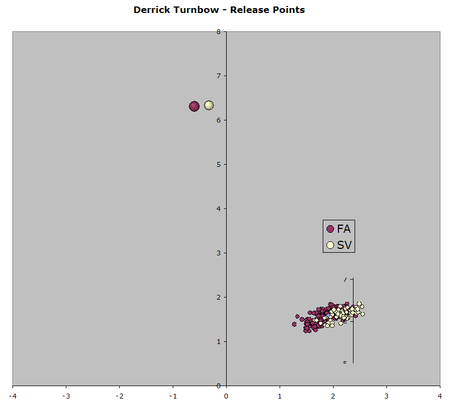 Before I go any further, you need to see this.  That slurve - it's nasty.  The whiff rate is through the roof.  The fastball, sadly, is maybe a little tougher than average, but he's exceptionally wild with it.  Severely unable to throw it for a strike consistently.  He's also not really fooling anyone.

Let's take a look at spin movement and flight paths. To give you an idea of how nasty that slurve can be (breaking hard at 85mph), there are two sets - the slurve is the same in each, but, one contains high fastballs (hFA) - any fastball that arrived at home plate more than 3 ft. off the ground. 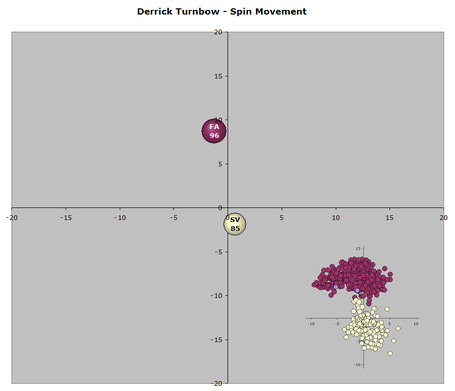 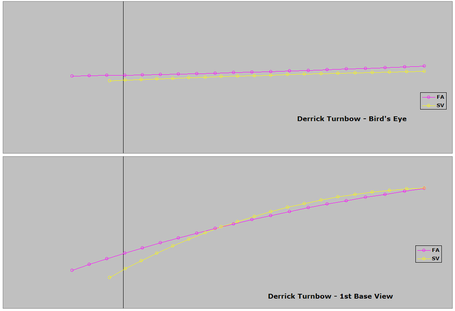 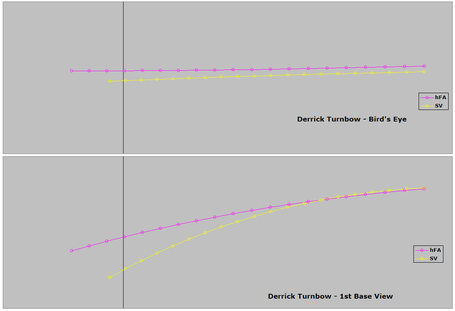 I think this is important to note - if you can disguise your breaking stuff as a high fastball, you can do pretty well.  Just a thought.

Turnbow's other problem - command being the biggest - is the reliance on the fastball.  If he's behind, you can just about always sit on it.  Here are his pitch selections by count.

He also seems unable, or unwilling, to throw many pitches that aren't up and away.  Particularly against lefties. 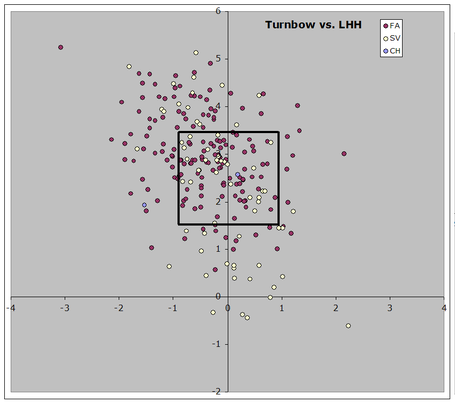 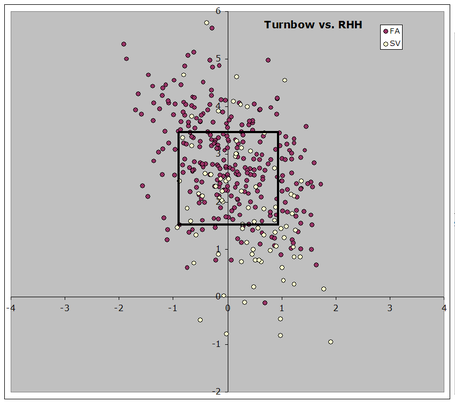 Very rarely does he go down and in for a strike.

I can see why teams are interested.  He stacked up a lot of saves at one time, which tricks some into thinking he was better than he actually was.  He throws hard, he's big, and has a nasty nasty breaking pitch.  But hitters will get too many chances where the pitch and location may be easy to narrow down.  Usually, that location is out of the zone.