What's All the Fuss? Part 1

Share All sharing options for: What's All the Fuss? Part 1

Daniel Cabrera and Derrick Turnbow are both getting plenty of phone calls, maybe even multi-year offers.  But why?  Maybe the answer lies in their stuff.

Eric Seidman recently noted Cabrera's velocity issues, so we already have some idea about how his stuff has been.  In Part 1, I'll take another look at Cabrera's speed, along with his slurve (curve? slider? whatever) and effectiveness.

Turnbow is another hard thrower, with a nasty slurve - one that could keep his name on the radar for a big league contract.  He'll be the subject of Part 2.

As I was polishing this article, mlb.com reported Daniel Cabrera has signed with Washington, pending a physical.

Daniel Cabrera's agent is said to have been contacted by as many as 11 teams.  That's despite ending his season early with an elbow injury.  But he's got the stuff that demands attention.  Or, at least, he used to.  His stat line isn't impressive, but I'll cut him some slack for pitching in the AL East.  He is a legitimate candidate for a back of the rotation job, assuming certain things fall into place.  Like his elbow and his command.

Here are the last three years for Daniel Cabrera, plus his 2009 Marcel projection, for a few basic performance metrics.

Marcel expects a recovery for Cabrera in 2009, but not to 2006 or 2007 levels.  Perhaps 2008 is considered an anomaly by projection algorithms, but, as Eric Seidman showed, Cabrera has lost some stuff over the years.

Take a look at Cabrera's pitch velocity by start.  These numbers are not adjusted for park-related errors/variance, so I'll follow up just his Baltimore starts.

This chart will look a little strange since not a lot of Cabrera's 2007 starts came in PITCHf/x parks.  It wasn't until 2008 that the system was in all 30.

Woah.  Let's take a look at Camden Yards only.

Oh my, he really could barely even touch 95, or not at all, for the most part.  Notice the drop in velocity for his secondary.  About those .... here are the basics on Cabrera's stuff.

pfx_x and pfx_z are measures of spin movement.  It answers the question "how many inches did the ball move from the path of a spinless ball with the same initial launch characteristics?"  Gameday shows them combined, as a single number, alongside a "break" value.  I perfer these numbers, myself.  The spin rate (rpm), I should note, tends to be understated for sliders, due to the angle of the spin axis yadda yadda.

Here's a graph of it, from the catcher's perspective.  Backspin causes a ball to "rise" (not literally), so a pitch that drops as much as you'd predict from gravity alone gets a 0 on the Y-axis (pfx_z). 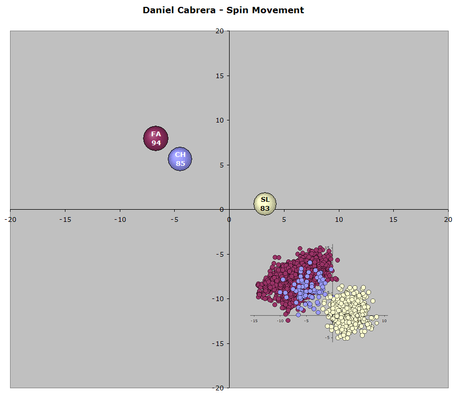 The inset shows the raw, unadjusted, data - indicates Cabrera may work in a two-seamer or cut his four-seamer on occasion, but I'm going to lump 'em together.

These flight paths may make more sense - one is overhead and one is first-base side.  The line is the front-plane of home plate.  The scale is squashed, or stretched.  8 ft. up-and-down, 80 ft. across. 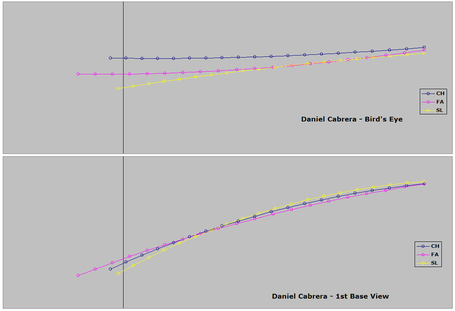 If you've seen these types of charts before, you'll notice Cabrera, on average, throws a bit of a tailing (maybe sinking) fastball and has a slider that really sweeps.  In the bird's-eye view, you also get some idea of how his slider, if thrown correctly, may be tough to pick-up.

So, he's lost his velocity, but how about effectiveness?  Let's baseline that first.

#,LHH,RHH should be self explanatory

Paint = off the edge, an expanded strike zone with a 24 inch plate (add paint to isz for the as-called/as-swung zone)

Chase = swing rate on pitches out of the rule book zone

Watch = take rate on pitches in the rule book zone

Cabrera doesn't throw a lot of strikes, although, in fairness, it is clear the change-up isn't intended to be in the zone.  The fastball misses too much, though, and I'm not talking about bats.  The slider and change, however, are pretty nasty pitches, based on those whiff rates.

To look at this over time, for 2008, I'l exclude the change-up due to the lack of them, especially when sliced by month. 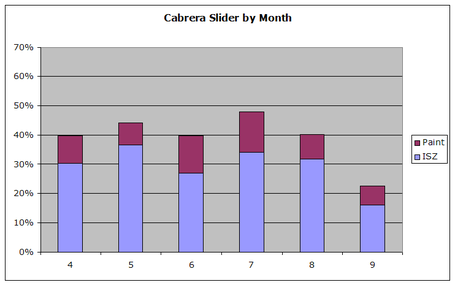 First and foremost, September is short on pitches - about a third as many as the other months (31 sliders for September, 97 in August). Still, not a great result for the sliders. 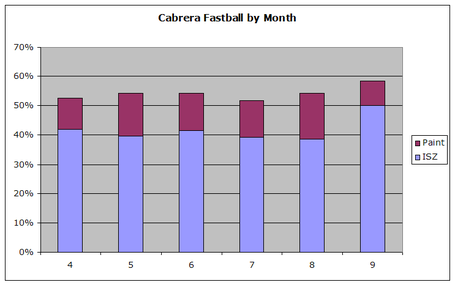 Before you say "hey, look, he lost velocity and got more accurate", look closely.  The paint-rate dropped and he threw 50% of his fastballs in the narrow, rule book zone.  Compared to 40% the other months, that's a big jump, even with a small sample. Sure he got more called strikes, but whiff rate on the fastball shows there's a problem.  Over the plate, and not all that fast, means a lot of contact.  The slider was OK, though, but not mid-season form. 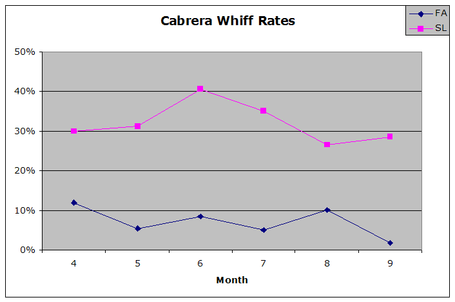 His stuff was poor in September, but the sample size does not mean it is predictive.  And, more so, the context - he was hurt.  Over the past few years, Cabrera has thrown quite a few innings (over 840 in the majors since 2004, and he's just 27) and suitors should be concerned about his health.  Perhaps 2008 was just a speed bump for his stuff, but the decline in his overall numbers indicate otherwise.

For the sake of argument, assume his velocity will come back, but not all the way.  So what?  If his command is failing him, he's going to have serious problems.  A pitcher can lose velocity but gain effectiveness, but it doesn't appear Cabrera has made any big moves on the power-finesse continuum.  He still pumped a lot of fastballs, even in those last two September starts. 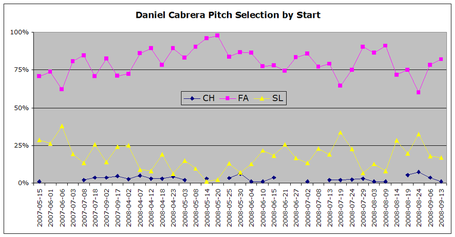 Whoever signs Cabrera (Washington) will be taking a risk on his health and/or his ability to adjust with age.  It really appears the elbow had a negative impact on September, but, even a "recovery" may not be "complete", as there were earlier signs, and trends, of decline. 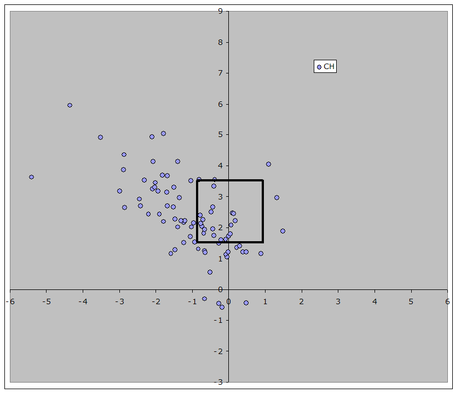 And one more update, overall averages for the #'s above, covering all pitches in the PITCHf/x database.

And by type averages, for the pitches I've ID'd. FB is all fastball variants (including cutters, which, in some cases, belong more with the sliders), OS is off-speed stuff (change, split, fork), BP is breaking pitches (slider, slurve, curve) and other is other.