Finally we reach the pure mashers who won't add much in the field. 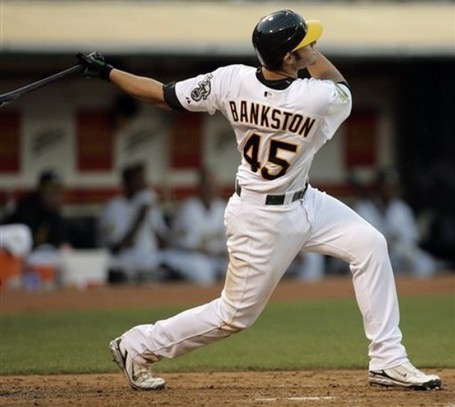 32 year old Brian Myrow is a sad case of a guy never really getting a shot. Sure, he's seen 33 games the past two seasons, but only 31 at-bats. He wasn't great in those at-bats, but for a minor leaguer with a career (PCL inflated) .920 OPS you would think he'd get at least 100-200 at-bats. Oh, and he's not one of those dime-a-dozen right-handed parts of a first base platoon, he's the lefty part.

Chris Shelton is one of those right-handed parts. Most casual fans will remember Shelton as "That one no-named guy who hit a lot of homeruns then fell off." Well, that's not entirely true. Even in 2006 Shelton had an above average OPS. Oddly Shelton has a better major league career OPS versus righties than lefties.

Chris Snelling simply cannot stay healthy, and that's a shame. Snelling has got on base 37% of the time versus righties. Some team could use that type of on-base production from their DH spot.

Wes Bankston is a former top prospect turned bust. He got some time in Oakland last season, but didn't showcase his impressive splits versus righties (.868) which would make him a decent platoon mate at DH/1B.

What in the world are Mr. and Mrs. Nix doing to produce sons who are F.A.T. in the baseball world? Laynce Nix joins his brother and comes off two seasons in which he tallied 10 games and 12 at-bats each. Rinse/repeat, platoon/worthy.

The 27 year old Jason Perry made his debut last July 4th. He only saw 16 additional at-bats, but in the minors was proficient in hitting, you guessed it, right-handed pitchers.

Ben Broussard doesn't have great splits in the majors, nearly a .800 OPS versus lefties. He's got some power though, and some hacky tendencies.

Jason Lane has shown power as well, although his splits are non-existent in the majors. He hits both hands equally above average, which is actually pretty useful.