These are the Omar Vizquels/John McDonalds of the world. All the leather you could want with none of the bat. I've added in a few "real" free agents that should go for cheap deals. Also, Jayson Nix was claimed on waivers, but I included him in the off-chance that he's released during the off-season. I used the 2009 projections (INF, OF) by Chone Smith when available, and the 2008 (INF, OF) when not. 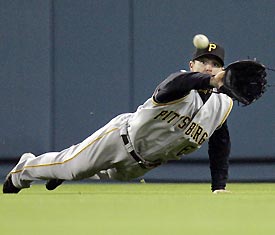 Cesar Izturis is a plus defender at shortstop and third base and projects to nearly a win at each position. Relative to league numbers Izturis actually had a better offensive season in 2008 than when he made the all-star team in 2005.

Everyone knows of Adam Everett and his defensive wizardry. Injuries slowed his 2008 season, but he was still a better defender than Brendan Harris. Everett would make a fine shortstop (1.9 wins) or second baseman (1.6), although he is on the wrong side of 30.

Ryan Roberts played for the Rangers in 2008, but was a draftee of the Blue Jays (naturally), his minor league numbers indicate he can hit some (OPS of .821) but his value more likely to be showcased with good defense at second. Two runs is better than none or negative two.

Jayson Nix was plucked by the Chicago White Sox and it's a smart move. Nix adds seven runs on defense, unfortunately he couldn't manage more than a .161 slugging percentage despite playing his home games in Coors, albeit a small sample size.

A victim of numbers in San Francisco, Ivan Ochoa adds two runs at second, but don't play him at short, he's worth negative three runs.

Finally we reach Adam Kennedy. His offensive numbers were better this season than in 2007, but he's still not quite where he was in Anaheim and 2002 is still an anomaly. Kennedy at second is worth roughly six runs.

By now, most people know how good of a defender Ryan Langerhans is. His bat has gotten him ran off from a few yards, but adding nearly a win in center and 1.4 wins in the corners is worth a shot. Someone will grab Langerhans instead of trading for Franklin Gutierrez.

Ditto for Endy Chavez. Yes, he made a miraculous catch in the NLCS a few years ago, but otherwise Chavez has fallen out of favor at a few places as well. He adds almost two wins(!) at any defensive position.   Endy is apparently not a free agent.

Emil Brown isn't quite as good defensively as everyone else on this list, only four runs, but he actually has some platoon hitting ability. A better investment than Jay Payton, Brown probably will be a minor leaguer next season.

And then there's three failed prospects...

Chris Duffy and Tike Redman are former Pirates centerfielders and both worth positive value in the field. Duffy 1.3 wins in the corners and 0.7 in center while Redman is worth 0.7 in the corners. Jason Tyner of Mets and Rays (and Twins I suppose) fame has one career homerun, but he's worth one win in the corners.

These aren't for those teams who want hitters, those come tomorrow.