One of the best hitters since 1990, Giambi probably isn't hall of fame material, but his career should be remembered nonetheless. 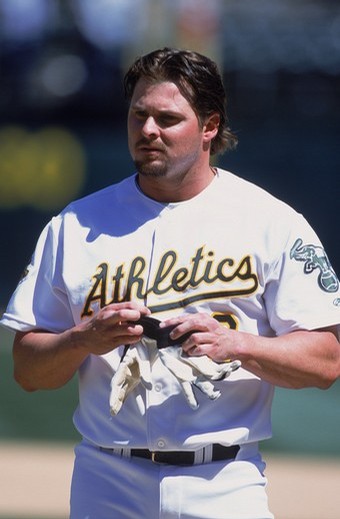 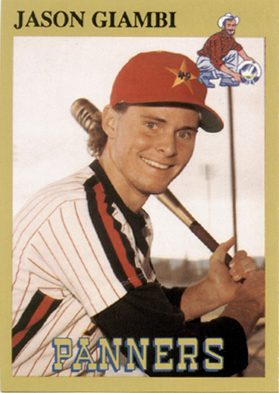 Giambi was re-drafted in 1992, but this time by the Oakland Athletics, and 41 rounds earlier. He'd sign, and spend his first two years in pro-ball tearing up the low-A levels. In 1994 Giambi received near equal exposure in AA and AAA, struggling at one of the levels, although shockingly dominating the higher level. This outbreak lead to 1995. Giambi would make his majors debut on May 8th, DHing and hitting seventh against Roger Pavlik and the Texas Rangers.

Jays pitcher Davi Cone would retire Rickey Henderson and surrender a double to Stan Javier before Giambi stepped into the box. Giambi would have a 1-1 count before hitting a ball deep to right field and giving the A's a 2-0 lead. They would lose 6-9, but for the player who hit 29 homeruns in a little 900 minor league at-bats, this homerun would mark the first of a substantially higher total.

Giambi ended 1995 with a line of .256/.364/.398 and six homeruns. Most impressively, Giambi ended with only three more strikeouts than walks. In 1996 and 1997 Giambi would launch 20 bombs each and began to morph into the player baseball came to know prominently in the early 2000's. As Giambi aged, more and more of his doubles were becoming homeruns. From 1997 until 2001 Giambi saw his homerun totals raise each season by at least six per season capping off at 43. 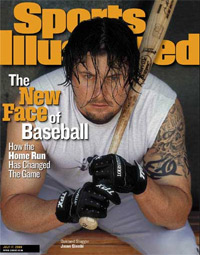 In 2000, Giambi would win the American League MVP award for helping the A's, alongside third baseman Eric Chavez, shortstop Miguel Tejada, and a loaded rotation win 91 games and the American League West. Giambi would have a .476 OBP, enough to make the OBP conscious Billy Beane swoon, and a .647 slugging. While MVP voters likely looked Giambi's 137 runs batted in, it's hard to ignore his walk and strikeout totals: 137 free passes (six intentional) and 96 strikeouts. For a hardcore slugger, Giambi was refuting the stereotype that sluggers were mass-hacking homeruns-hitting barbarians.

Giambi would enter his last year of team control in 2001, forcing the Athletics to either trade the slugger, or sit on him for the season and take draft picks as compensation. They would keep Giambi, and he would reward them with an even better season than 2000 (.477 OBP, .660 SLG), and yet finish second in MVP voting to rookie, and media appointed face of the 116 win Mariners, Ichiro Suzuki. In the 2002 draft the Athletics would use their compensation picks to choose Joe Blanton and Jeremy Brown. In a roundabout way, Giambi brought them Josh Outman,  Adrian Cardenas, and Matthew Spencer. 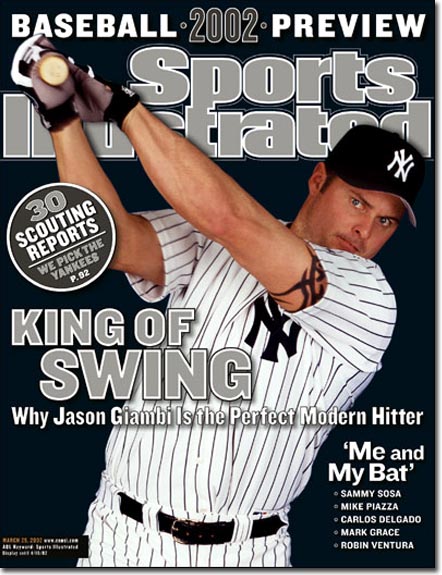 At this time, the Athletics were arguably the Yankees biggest nemesis in the playoffs, despite having yet to defeat them. After all, how could a team such a lower payroll compete? Of course the Red Sox were still around and just a year before added the astounding Manny Ramirez to their lineup. The Yankees weren't content with a World Series loss, and would ink Giambi to a seven year, 120 million dollar deal in December of 2001. The carefree Giambi, with long flowing hair and a grizzled beard had to abide by Yankees rules and become clean-shaven. Symbolism lovers can note this as Giambi's ultimate transformation from the lovable underdogs to the hated empire.

For whatever reason, a lot of people didn't consider Giambi a "real Yankee" until May 17th 20002. In the bottom of the 10th, with the bases loaded and trailing by three Giambi would hit the first pitch he saw from Mike Tombley into deep right-center during at typhoon. Apparently, that's the play that Giambi earned his pinstripes, but up until that point Giambi was having a decent, if not Giambino like season: .385 OBP/.506 SLG.

Giambi would begin wrap his final 1.000+ OPS season in 2002, and saw it drop to below .940 for the first time since 1998 in 2003. In 2004, Giambi would have an awful year in health and status. In late 2004, the San Francisco Chronicle published a report that Giambi had admitted using numerous performance enhancers during the BALCO trials of 2003. Giambi's usage apparently ranged from 2001 onwards  Giambi apologized publicly, although never stating why, and for whatever reasons has avoided the pariah status given to Barry Bonds - perhaps a better working relationship with the media?

Giambi would return to excellence in 2005 and 2006, posting back to back .970+ OPS seasons and hitting nearly 70 homeruns. Injuries yet again struck Giambi in 2007, leading the New York papers to speculate on the Yankees voiding Giambi's contract for admitting hGH usage. That didn't happen, and Giambi would again excel in 2008.

Entering this off-season Giambi is now a free agent. With the Yankees potentially pursuing Mark Teixeira, Giambi appears on the way elsewhere. Some have murmured that he would fit back with Oakland, or perhaps with the Angels, but there's also some talk that Giambi could land with the Tampa Bay Rays, alongside good friend Carlos Pena.

Whatever Giambi does from here is largely irrelevant to his legacy. During the late 90's and early 2000's it was hard to find a better hitter. With a rare blend of discipline and power, Giambi was more than a roided-up homerun hitter, he was a hitter whose homeruns were the results of great batting processes, and we'll likely see the 400th such result sometime next season.