Sky's note: Even though this article turned out not to be some sort of R.J. Anderson-bashing piece, it was still worth bumping from a FanPost to the main blog. 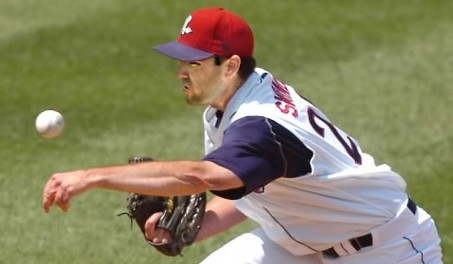 After becoming the Big South Player of the Year in 2003, R.J. Swindle was drafted in the 2004 Amateur Draft by the Boston Red Sox in the 14th round. In short season A ball, Swindle quickly went to work in relief and struck out 56 batters while only walking 4 in 51 innings. Surely a pitcher of this caliber and only 21 would have been given a chance, but instead Swindle was met with a cut. Swindle bounced around in the independent leagues for a while until he was signed by the New York Yankees. He gave up 3 earned runs in 46 innings pitched for them between A and AAA for an ERA of 0.59. His peripherals were, once again, amazing with a 9.0 K/9 and a 9.2 K/BB ratio. He was released again for his efforts. The Phillies were the next team to give him a shot and he got 67 Ks and 8 BBs in less than 50 IP. He is released again and is currently a minor league free agent.

R.J. Swindle has been dominant for his entire minor league career and no team has truly given him a shot. How could such a talent go so ignored? The answer is, quite simply, scouting. Swindle's fastball tops out at a grand total of 82 miles an hour. His curveball averages 55 mph and his slider rarely goes above 75 mph. Swindle throws slower than Tim Wakefield, yet he somehow posts video game-like numbers.

In 2008, the Phillies called up Swindle and gave him 3 appearances. In all of them, he got shelled heavily and gave up an uncharacteristically high 2 HRs, 2 walks, and 9 hits in 4.7 IP. His BABIP was over .400. This hardly proves that Swindle can't cut the mustard at the major league level when you consider the sample size and everything else.

MARCEL has an R of 0.02, so I'm simply going to toss that number out. There is no way a prediction would be reliable.

CAIRO placed R.J. Swindle at 11.5 RSAR. For an idea, two other 11.5 RSAR relievers are Scot Shields and Hideki Okajima.

Overall, there is almost nothing to lose by signing R.J. Swindle to a contract. He's a minor league free agent currently and he has massive upside. Personally, I can see Swindle finding success as either a LOOGY (and I was surprised not to see this junkballing lefty in the F.A.T. LOOGY list) or perhaps being dominant enough to hold a setup man job. If some team is willing to take a shot with a pitcher who is hated by scouts but loved by statistics they might find a gem in the rough with R.J. Swindle.