One of the league's greatest players (and personalities) of all time. 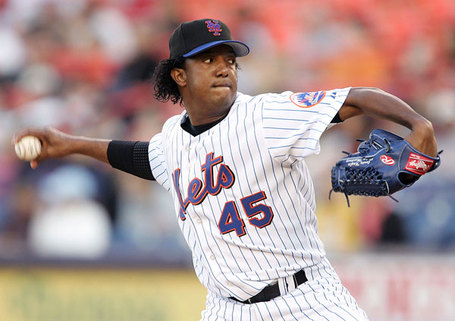 Signed as an amateur free agent in 1988 by the Los Angeles Dodgers, it took Pedro Martinez a little over four years to reach the major leagues. As a 20 year old, Pedro would pitch eight innings, including a six inning spot start, allow seven base runners, and strike eight out. Entering 1993 the Dodgers manager, Tommy Lasorda, decided against using Pedro in the starting rotation, citing size and durability, instead Pedro became the Dodgers set-up man.

Although his walk totals were a bit high (4.79 per nine) Pedro would strike out more than 10 per nine while holding opponents to 0.42 homeruns per nine. Martinez would finish 20 games, slightly more than Roger McDowell and Omar Daal (another 21 year old reliever soon to turn starter) but quite a ways behind closer Jim Gott. Martinez worked nearly 30 innings more than any other reliever, and only about 80 innings behind the Dodgers fifth starter, Pedro Astacio. Pedro finished ninth in National League Rookie of the Year voting behind players like Kurk Rueter, Wil Cordero, Kevin Stocker, Al Martin, Jeff Conine, Greg McMichael, and winner, as well as teammate, Mike Piazza.

The Dodgers would lose starting second baseman Jody Reed to free agency, so rather than signing a free agent of their own; instead they traded Pedro to the Montreal Expos for Delino DeShields^. In hindsight, this deal is beyond ridiculous, at the time it was still dumb. DeShields was a 24 year old who was offensively above average, but not by much. He didn't possess much power, but did get on base to an acceptable amount in 1993 (.389) although ironically it would be his career high. We've talked about Martinez' production, yet there was more than just numbers to support his potential. Yes, he was of small stature, but his right arm unraveled a blistering mid-90's fastball caught batters off guard, and a strikingly exact arm motion lead to a change-up that left hitters guessing and usually swinging.

In Montreal Martinez would step right into the rotation and throw 144 innings in the strike shortened 1994 season. A 3.31 FIP marked a successful campaign, and Martinez dropped his walk rates by nearly two full walks per nine. His strikeout numbers also fell, but still came close to one per inning. At this point I'm quite sure the Dodgers regretted making the deal, and this would be prior to his run of five straight 200+ inning seasons. The little guy with the dragon attached to his right arm would struggle a bit in 1995, at least by his standards, a 3.9 FIP and slightly declined strikeout/walk totals were met with a below average strand rate.

The most notable instance of Pedro's dominance in 1995 was during a start in early June against the San Diego Padres. Despite retiring every batter through the first nine innings, the score was tied at zeroes, meaning Martinez would not receive credit for a perfect game. The Expos gave Martinez a lead in their 10th inning, but Martinez would give up a hit to the Padres leadoff hitter, effectively ending the extended perfect game.

1996 and 1997 would be different however, as Martinez would blaze through 458 innings and strike 527 batters out. That's 1.15 per inning, and over 10.3 per nine. At the same time Martinez would walk only 137, a nearly 4:1 strikeout to walk ratio. Pedro would test the boundaries of starting pitching excellence with a 2.39 FIP in 97. Tragically the Expos ace was encroaching on free agency, and thus a decision had to be reached. Either keep Martinez and risk losing him for draft picks, or trade him and hope for the prospects to work out.

Nearly four years to the day of the Expos acquiring him, they sent Pedro to the Boston Red Sox for prospects Carl Pavano and Tony Armas Jr. Within weeks the Red Sox and Martinez agreed on a seven year, 92 million dollar extension, keeping Martinez with the Red Sox through 2004. Martinez would pack his Cy Young award and pitch decently for the Sox in 1999, although by FIP the worst of his career since 1995. There may have been some murmurs of Pedro meeting his match in the American League, those quickly ended in 1999.

Some seasons make you stand up and take notice of excellence, and 1999 was exactly that for Martinez. Consider his 213.3 innings of pure dominance, 13.2 strikeouts per nine, 1.56 walks, and 0.38 homeruns. A 1.39 FIP over 200 innings is simply unheard of. In September at Yankees Stadium Martinez pitched nine innings, retired 28 batters, struck 17 out, walked zero, and allowed only a solo homerun to Chili Davis early on. Otherwise Martinez did exactly what the Sox had acquired him to do: beat the Yankees.

To the average fan, or at least the one who puts weight in ERA, 2000 was even better. Although his FIP would balloon to 2.16 (sarcasm) Martinez would add another historic event to his career. In a game against the lowly Devil Rays Martinez would hit the game's first batter, Gerald "Ice" Williams, who then charged the mound, pushing Martinez and leading to ejections and bench emptying. Martinez was not ejected, and took it out on the Rays. 13 strikeouts and zero hits or walks were broken up in the 9th by John Flaherty, again derailing Martinez' opportunity at history.

1999-2002 might be the single greatest run in pitching history despite Martinez missing most of 2001 due to a rotator cuff injury. Martinez threw 746.3 innings, walked 134, and struck out 999. That's 1.34 Ks per inning and 7.46 strikeouts per walk. That's an unreal amount of dominance, almost Bondsian on the mound. Things weren't exactly bad in 2003 or 2004 for Martinez. He earned his first ring in 2004 and had a 2.24 FIP in 2003. Martinez entered the free agent market with all kinds of qualifications necessitating an awfully large contract.

Martinez got four years and 53 million from the New York Mets. Something odd happened along the way. No longer was Pedro striking out nine per (he would resume doing so in 2006) and his homerun rates, which had sneaked over one for the first time since 1998, stayed high rather than regressing to the previous miniscule amounts. Martinez' 2.95 FIP was lower than his 3.58 number in 2004, but not what we'd come to expect from him. 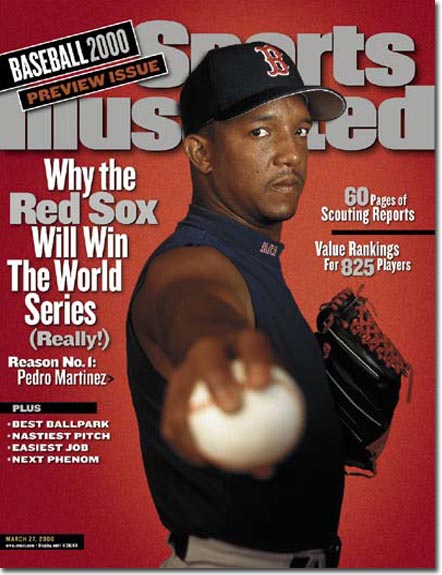 Well, it wasn't Pedro's fault SI was wrong via i.cdn.turner.com

2006 would be worse, increased walks, homeruns, and a lesser strand rate helped earn Martinez a 4.05 FIP. His fastball no longer hitting 90 and injuries piling up, Martinez hinted that he may retire after the 2007 season. He obviously chose not to, but both 2007 and 2008 would be sprinkled with nagging injuries, including a strained hamstring that kept him off the mound for quite some time, ruining any hopes the Mets had of a Johan Santana/Pedro Martinez 1-2 punch.

In limited action this season he saw a 5.18 FIP, the highest of his career, and mediocre strikeout and walk rates as well as a tendency to give up homeruns. Martinez is now 37 and sitting on the free agent market with a future full of uncertainty. Less and less hitters were swinging and missing at his pitches, and more were making solid contact, making for a bad combination. Some team will likely offer Martinez a contract based on name-value alone, but this Pedro is hardly the Martinez we came to know, love, and at times hate

As a fan of a long time rival facing Pedro was unwanted because you knew exactly what you were getting, and that was usually not much of a chance to win. Pedro in his prime was more than just someone to watch, he was someone to cherish. Greatness like that doesn't come around often.