Will the Cincinnati Reds be the Surprise of 2009?

Share All sharing options for: Will the Cincinnati Reds be the Surprise of 2009?

The transformation of Tampa Bay from the bottom-feeding Devil Rays to the championship-contending Rays has truly been amazing. Even though some in the sabermetric community saw it coming, the Rays have still exceeded nearly everyone’s expectations, vaulting into the ALCS.

Much of Rays’s improvement can be attributed to a drastic improvement in their defense. The Rays defense went from historically-bad in 2007 to one of the best in the league in 2008. In fact, the Rays allowed exactly 300 less hits this year than last year, despite having very similar walk- and strikeout-rates. The pitching staff undoubtedly improved – they gave up 33 fewer homers this year than last year, partially due to addition by subtraction. However, the improved Rays defense is a very big reason for the Rays’s turnaround.

With that in mind, are there any teams that may be primed to make an unexpected run in 2009?

The Reds had the worst PADE in baseball this season. Despite this, they "only" allowed the 23rd most runs in the league – yes, this is a lot, but it suggests that much of the problem is the Reds defense, rather than the pitchers themselves.

The numbers bear this out. The Reds staff allowed the most homers in baseball – but part of that is because Great American Ballpark is quite homer-friendly. They were middle-of-the-pack in walks (16th, to be exact), and they were fourth (!) in baseball in strikeouts. (Incidentally, in 2007 the Rays had the second most strikeouts in baseball.) 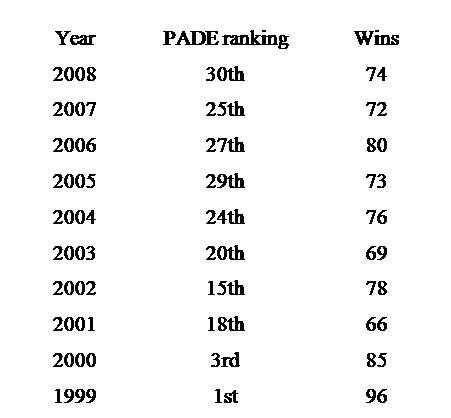 The Reds have a unique opportunity in 2009. They will be without both Adam Dunn and Ken Griffey Jr. – both of whom have been well below average defenders. Jay Bruce, Joey Votto, and Brandon Phillips are all excellent defenders. The Reds have the opportunity to dramatically improve their outfield defense if they can find two solid defenders to complement Bruce. While Edwin Encarnacion is a very poor defender at third base, if the Reds can find a shortstop with above-average range, they may also be able to somewhat offset Encarnacion’s poor play at third.

The Reds have an underrated pitching staff that was severely hampered by the defense behind them this year. The Reds have an opportunity to dramatically improve their defense for 2009; if they do so, they may be the surprise story of 2009.